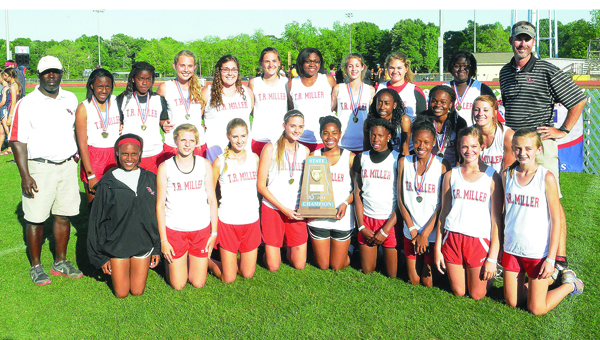 The T.R. Miller girls track won the 2014 state championship Saturday in Selma.
The TRM Girls posted 153 points for first place while Cottage Hill scored 86 for second place.
The TRM Boys took fifth place with 44 points. Piedmont took first place while Greensboro placed second.
We will post more information from Saturday’s meet when it is posted.
Please see Wednesday’s edition of the paper for a complete recap along with pictures and comments.
At the class 3A state track meet last year in Selma, the T.R. Miller Lady Tigers finished second to Bayside Academy for the second year in a row. The Tigers boys placed third.
The Lady Tigers scored 110.5 total points while Bayside placed first out of 29 teams with 131.5 points. Piedmont took third placed with 67 points.
On the boys side last year, T.R. Miller scored 57.5 points finishing behind state champion Piedmont’s 81 points and Trinity’s 74.
With the second place trophy for the Lady Tigers being the second in a row for T.R. Miller, it was another finish in the top two for the Lady Tigers since 2009.
The Lady Tigers won their first championship in 2010 and claimed back-to-back championships after winning the title again in 2011. T.R. Miller finished runner-up in 2009 and 2012.
The T.R. Miller boys team took the runner-up trophy in 2011 after winning titles in 2009 and 2010. The T.R. Miller boys teams have won seven state championships since 1991 and five since 2003.
The team won two 4A titles in 1991 and 1992 while taking five 3A titles in 2003, 2004, 2006, 2009, and 2010 and runner-up in 2011. T.R. Miller was fifth place in 2012.