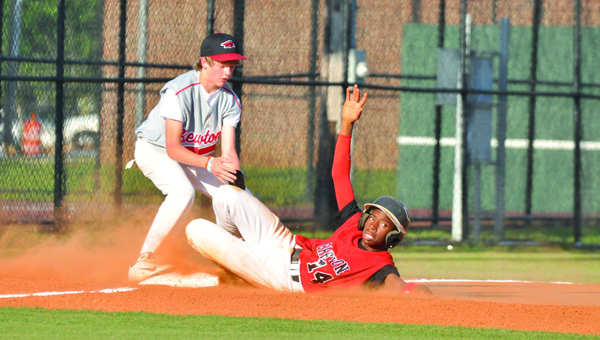 Although their uniforms had not made it in yet, the 2014 Brewton Babe Ruth season kicked off Monday afternoon at T.R. Miller and two teams started the season 1-0 while the other two started 0-1.
In game one Monday, the Brewton Babe Ruth South Carolina Gamecocks edged out the Arkansas Razorbacks 7-6.
In game two Monday, Arizona State handed LSU a 3-2 loss.

South Carolina 7,
Arkansas 6
After blowing a five-run lead to Arkansas, South Carolina broke a 6-6 tie in the top of the seventh inning to get a 7-6 win in their season opener Monday night in Brewton.
The Gamecocks led the Razorbacks 2-0 after one inning of play and 5-0 after the top of the third before seeing the Razorbacks get four in the bottom of the inning to cut the lead to 5-4.
South Carolina would grab a 6-4 lead heading into the bottom of the fifth inning, but the Razorbacks plated two in the bottom of the inning to tie the game at 6-all.
In the top of the seventh, Steven McCall scored the winning run on a wild pitch and South Carolina held Arkansas off the board in the bottom of the inning to get the one-run win.
Joshua Winton earned the pitching win on the mound for South Carolina in relief. Winton joined Caleb Winton, Aaron Bosarge, and Derrick Barton on the mound. The quartet combined to go seven innings and allowed four hits, six runs, walked six, and struck out eight.
Jacobey Hawthorne had a single at the plate while Joshua Winton had a double and one RBI. Caleb Winton had three RBIs while Preston Townson added a single and two RBIs.
Troy Lewis added a double while Bosarge had two singles and McCall had a single and a double.
For Arkansas, Weston Riddle was charged with the pitching loss in relief of starter Drew Williamson and Matt Hutchins. The trio went seven innings and allowed eight hits, seven runs, walked two, hit three and struck out eight.
At the plate, Hutchins had two singles and three RBIs while Jo Jo Booker added two singles and two RBIs.

Arizona State 3, LSU 2
Trailing 3-2 in the bottom of the fifth inning, LSU left the bases loaded as Arizona State earned a 3-2 win over the Tigers.
Both teams played to a 2-all tied after one inning of play. The lone run after the first inning came in the third inning to give Arizona State the win.
Andrew Etheridge earned the pitching win on the mound for the Sun Devils while Russell Smith earned the save.
Etheridge and Smith combined to go five innings and allowed two hits, two runs, walked one, struck out eight and hit four batters.
Micah Flores had a single for ASU along with Smith and Etheridge. Etheridge had one RBI while Hunter Brittain added a double.
For LSU, Brandon Moye took the loss on the mound as he went three innings of work. Lane Clark went the final inning. The duo combined to allow four hits, three runs, walked one, struck out eight and hit one.
At the plate, O’Neil White and Colton Young had a single each with White having one RBI. Tyler Baxter had a hit as well.
LSU made six errors in the loss.