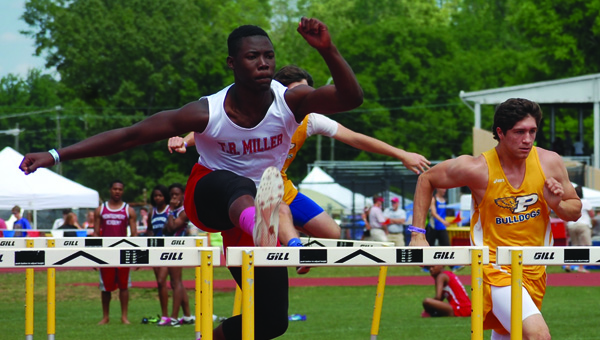 At the state meet Friday and Saturday in Selma, the T.R. Miller boys took fifth place with 44 points. Piedmont took first place while Greensboro placed second.
“The boys team…we finished in fifth place, but we were down and it was not too big of a gap between fifth place,” Brundidge said. “We got ourselves in a hole, but I was proud of the effort from some of them. We had some of the boys step up like Markail Mitchell getting a wild card in the javelin. We came out and had a great state meet and came in third place with a personal record. I was well-pleased with him.”
Brundidge said his relay teams had a great state meet.
“Our 4×100-meter team won first place, which was great,” he said. “We didn’t have a good day on Friday and got a bad time and drew a bad lane assignment, but they knew what they did wrong and came back and fixed it. Our 4×400 team, they knew we didn’t have a chance to win first or second, but they sucked it up and bowed up and was tough and finished off things the right way and came in second place. I was really proud of them.”
For T.R. Miller’s boys, Ahmaud Taylor led with 8 points while Markail Mitchell had 6, Bailey Graves and Trin Miller had 3.5, Fabion Jones had 3, and Terry Sameul and Zack Whitworth had 1 each.
McHenry Coleman came in 11th place in the 100-meter dash while Terry Samuel was ninth in the 200-meter dash while Coleman was 13th.
Taylor came in fifth place in the 110-hurdles with a time of 16.16. In the 300-meter hurdles, Tamerick Jenkins was 15th. T.R. Miller’s boys took the state championship in the 4×100-meter relay with a time of 43.99.
The boys took second in the 4×400-meter relay with a time of 3:38.27. Taylor was sixth in the high jump while Mitchell was 11th.
In the pole vault, Bailey Graves and Trin Miller tied for fifth place with vaults of 10 feet.
In the long jump, Taylor was 12th while Kadarius Jones was 18th.
In the triple jump, Taylor was eighth while Kieon Smith finished 10th. In the shot put, Fabion Jones took sixth place while Zack Whitworth took eighth.
For T.R. Miller in the discus, Duncan Brittain took 14th place while Tre English took 15th place for W.S. Neal. Mitchell was third for T.R. Miller in the javelin with a throw of 157 feet 11 inches. Terry Samuel was eighth and Jalen Jones was 24th.
Brundidge said his seniors would be missed.
“We have a couple of seniors on there in Zack Whitworth, Dominique Jackson, Kieon Smith and Khadarrius Jones,” he said. “They all gave great efforts. We just got in a hole and could not overcome it. I was pleased with their efforts and thought they all tried and we just came up a little short.”
At the class 3A state track meet last year in Selma, the Tigers boys placed third.
On the boys side last year, T.R. Miller scored 57.5 points finishing behind state champion Piedmont’s 81 points and Trinity’s 74.
The T.R. Miller boys team took the runner-up trophy in 2011 after winning titles in 2009 and 2010. The T.R. Miller boys teams have won seven state championships since 1991 and five since 2003.
The team won two 4A titles in 1991 and 1992 while taking five 3A titles in 2003, 2004, 2006, 2009, and 2010 and runner-up in 2011. T.R. Miller was fifth place in 2012.