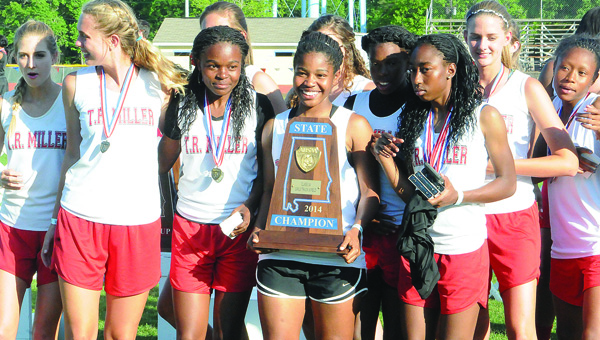 photo courtesy of the Selma Times-Journal

The T.R. Miller Lady Tigers picked up their third state championship in five years Saturday in Selma.
The win for T.R. Miller’s girls also made it six straight years the Lady Tigers finished in the top-two at state. The Lady Tigers posted 153 points for first place while Cottage Hill scored 86 for second place. “It is kind of hard to describe,” T.R. Miller track head coach Eddie Brundidge said of the feeling of winning another state championship. “I have been really blessed with some great kids over the years and that is what it really has been all about. This year’s girls team has been spectacular pretty much all year long. We were fortunate to have a slew of girls come out and several new girls that this was their first year out. They came out and some were a natural at things. They were able to make it all year and get themselves qualified.”
Brundidge said the veterans on the team, along with the new faces, scored highly at the state meet.
“Scoring 153 points is pretty big and we a lot of those were not first place wins,” Brundidge said. “A lot of them were low-win points from some kids that were some first-time athletes. And that is big at the state meet to have some depth. A lot of times when you can’t get a first place, it’s good to get a second and a fourth or a fourth and a fifth or a seventh. Every little point counts and that really helped us open up the gap as far as points go.”
Also for T.R. Miller, Serena Smith tallied 16 points while Makayla Harrison added 15.
“Smith won the discus for us, and then the girls’ 4×100 and 4×800 team won first place, and then after that, it was just some good steady performances out of all of them as a group,” Brundidge said. “We were able to score in every event that we had somebody in. We had people in 17 out of 18 events. We did not put anybody in the 100. We kind of sacrificed that one, but every event we had someone in, we scored in and that was big at the state meet level.”
Senior track member Amber Terry, who tallied nine points in the win, said winning a state championship was a great experience.
“Honestly, it was such a privilege to be apart of such a talented team,” she said. “As a senior it makes this championship even more important that we went out with a bang. It has been an unforgettable experience and an honor to hold three state championships within my track and field career.”
Brianna Dees and Allie Nelson both had eight points while Katie Nelson had seven and Payton Baxter had 4.5 Morgan Rowell added 3 along with Mekiah Williamson while Kara Bradley and Sarah Byrd had 2 points each. Akilah Brazile added 1 point.
Dees finished eighth for T.R. Miller in the 200-meter dash with a time of 27.50 while Allie Nelson finished fifth in the 1600-meter run with a time of 5:32.88. Katie Nelson finished in seventh place with a time of 5:37.22.
In the 3200-meter run, Katie Nelson ran a time of 11:51.64 for fourth place while Tarah Townsend came in ninth place with a time of 13:16.43.
In the 100-meter hurdles finials, Walker took third place with a time of 16.73 while Rowell was sixth with a time of 17.68.
In the 300-meter hurdles, Walker was third with a time of 49.34 while Allie Nelson was fifth with a time of 50.96 and Williams was sixth with a time of 51.29.
T.R. Miller’s 4×100-meter relay team claimed first place with a time of 52.03 while the 4×400-meter relay team was second to Bayside Academy with a time of 4:24.47. W.S. Neal’s 4×400-meter relay team took 21st.
The girls 4X800-meter relay team also took first place with a time of 10:14.72.
In the girls high jump, Walker was fourth with a jump of 4 feet 8 inches. Harrison was seventh and Terry was 10th.
In the pole vault, Terry was second with a vault of 8 feet. Baxter was fourth and Rebecca Evans was ninth.
In the long jump, Harrison was fourth with a jump of 16 feet 3 inches. Dees was eighth and Shayn Bradley was ninth.
Harrison was second in the triple jump with a jump of 34 feet 4 ¼ inches while Dees took third and Byrd was seventh.
In the shot put, Serena Smith was third while Brazile was eighth and Kelsey Thompson was ninth. Smith claimed an individual state championship in the discus with a throw of 99 feet. Krystal Bell was 15th. In the javelin, Kara Bradley took seventh while Terry was eighth.
At the class 3A state track meet last year in Selma, the T.R. Miller Lady Tigers finished second to Bayside Academy for the second year in a row.
The Lady Tigers scored 110.5 total points while Bayside placed first out of 29 teams with 131.5 points. Piedmont took third placed with 67 points.
With the second place trophy for the Lady Tigers being the second in a row for T.R. Miller, it was another finish in the top two for the Lady Tigers since 2009.
The Lady Tigers won their first championship in 2010 and claimed back-to-back championships after winning the title again in 2011. T.R. Miller finished runner-up in 2009 and 2012.
“I just appreciate the efforts out of all of them,” Brundidge said of his girls team. “We are going to miss our seniors, but we have a great group of young kids coming back. They have me fired up and excited about next year rolling and seeing if we can’t reload and possibly make another run at it again.”