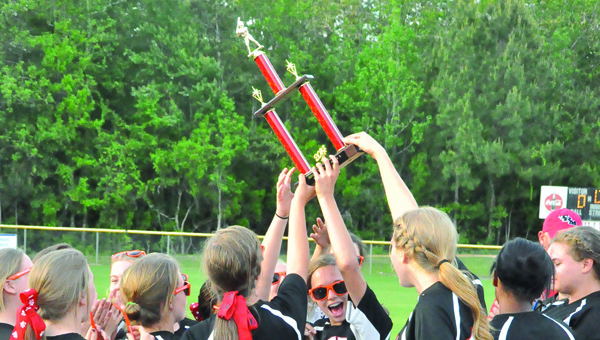 In exciting fashion Thursday, the T.R. Miller Lady Tigers earned a 3-2 win over Cottage Hill in eight innings to claim their first area tournament championship since 2010.
The Lady Tigers went 3-0 on the day, taking down Bayside Academy 15-2 in game one, W.S. Neal 7-4 in game two, and winning 3-2 over Cottage Hill. Krystal Bell had the game-winning hit and RBI for T.R. Miller.
T.R. Miller Lady Tiger head coach Greg White gave Cottage Hill credit after having to play four straight games and said getting the win was a “grind.”
“We have played them three times this year and two of the three were grinding wins,” White said. We played them down in Mobile and it was a 4-1 game and it was a grind. Today was just one of those days where we were just a little tired, but we did what we had to do when we had the opportunity. Krystal (Bell) came through with a big hit, but it started with Ninja’s (Madison Douglas) hustle down the baseline on the infield hit. It was a great win, and I am proud of them for that.”
Bell said she was glad to get the game-winning hit and RBI.
“I went up there and all I heard was just people yelling ‘Taco, Taco’ (Bell’s nickname),” Bell said. “It really got me pumped up. They were all relying on me to get a hit. It was only one out and I wanted to get that hit. I just saw the ball and hit it. I was a little worried because it was not a solid hit. I thought somebody might snag it. Then it passed through the middle and I was like ‘yes!’.”
The win for T.R. Miller sends them to the South Regionals in Gulf Shores next week. T.R. Miller will play at 5 p.m. Friday.
“Overall, we played pretty well all day long,” White said. “We took care of business earlier today with Bayside, and then we had a great and emotional game with W.S. Neal.” White said his team were fortunate to come out with a win against W.S. Neal and he was just proud of it for this team.
“We have two seniors who have been through a lot,” he said. “They have had a couple of rough years over the last few years. To get the area championship in their senior year after the last few years, I am proud of that for them. These young kids have stepped up and they have bonded and gelled all year and I just proud of them for doing that. Hopefully, we can continue on into Gulf Shores and do something with that.”
T.R. Miller will play at 5 p.m. Friday in Gulf Shores. T.R. Miller will play again at 8 p.m. Friday night—win or lose.
If T.R. Miller wins their first and second game Friday, they would play at 11 a.m. Saturday.
If T.R. Miller won their first game and loses their second game Friday at 8 p.m., they would play again at 11 a.m. Saturday as well. If T.R. Miller lost both games Friday, they would be eliminated because the tournament will be double elimination.
If the Lady Tigers won their 5 p.m. game Friday and Friday night’s 8 p.m., they would play at 11 a.m. Saturday also. With a loss in Friday’s 5 p.m. game and a win in the 8 p.m., the Lady Tigers would still play at 11 a.m. Saturday morning.
T.R. Miller will play the class 3A area 4 runner-up Friday in Gulf Shores.
Area 4 consists of Abbeville, Barbour County, Montgomery Catholic and Pike County.
White said there are three key elements for his team to win at the regionals in Gulf Shores.
“We are going to have to pitch solid and play solid defense,” he said. “We are going to have to hit the ball. That is the three things we are going to have to do. If we will just go there and play like T.R. Miller, I think we will have a chance. We can’t go there and shoot ourselves in the foot and make errors and waste our at-bats. If we play like we are capable of, I think we can go there and make some noise.”
W.S. Neal went 1-2 Thursday and finished third in the tourney. The Lady Eagles opened with a 3-0 win over Cottage Hill before falling to T.R. Miller and Cottage Hill in a rematch by a score of 4-1.
Cottage Hill finished as the tourney runner-up and will join T.R. Miller in Gulf Shores. The Lady Warriors went 2-2 in the tournament. Bayside Academy finished fourth with an 0-2 record.
The loss for W.S. Neal ended their season with a 17-14 overall record while T.R. Miller improved to 19-8.

TRM Lady Tigers 15, Bayside Academy 2
T.R. Miller struck for seven runs in the first inning Thursday against Bayside to roar to a 15-2 win in their first game of the tournament.
Along with the seven-run first inning, T.R. Miller added one in the second, four in the third and three more in the fourth inning while holding Bayside to one run each in the second and fifth innings.
Taylor Austin earned the pitching win as she went five innings and allowed two runs, three hits, walked three and struck out two.
At the plate for the Lady Tigers, Madison Douglas had two singles and Steely Ruzic added one. Mallori Floyd had two singles while Myra Reiss had a double and Bell had a single. Abbi Roberts had two singles and a triple while Moriah Brundidge added a triple and Grace Ruzic had a single.

TRM 7, WSN 4
Leading W.S. Neal 5-4 after six innings, the Lady Tigers turned a one-run into a three-run run in the top of the seventh inning to defeat W.S. Neal 7-4 and earn a spot in the championship game and the South Regionals in Gulf Shores—but the runs came after an important call in the inning.
When it looked like W.S. Neal would head into the bottom of the seventh inning trailing their rival by only one run—after getting the third out of the inning by throwing a runner out at the plate—an obstruction call was called against W.S. Neal after T.R. Miller’s runner was interfered with trying to score.
T.R. Miller ended up plating two runs in the inning and held W.S. Neal scoreless in the bottom of the inning to get the three-run win. While W.S. Neal failed to score in their part of the seventh, the Lady Tigers took the win by three runs.
Brundidge earned the pitching win for T.R. Miller while Austin earned the save. Brundidge went five innings and allowed two hits, four runs, two earned, walked eight, hit two and struck out seven. Austin went two innings and allowed no runs and no hits, while walking and striking out one batter.
Steely Ruzic had three singles for T.R. Miller at the plate; Floyd, a single; and Reiss had two singles and two RBIs.
Bell added two singles and a double; while Austin had a triple and a single and two RBIs. Roberts added a double and one RBI.
For W.S. Neal, Dubose and Erin Hartsel had a single each for the team’s only hits. Hartsel had two RBIs in the loss.
Dubose was credited with the pitching loss as she went seven innings and allowed 12 hits, seven runs, five earned, walked one and struck out six.
T.R. Miller led W.S. Neal 2-0 after one inning but saw their lead get cut in half in the bottom of the fourth when W.S. Neal plated one run to cut the lead to 2-1.
In the fifth, T.R. Miller looked to put the game away with three runs to grab a 5-1 lead, but the Lady Eagles responded with three runs of their own in the bottom of the inning to cut the lead to 5-4.

TRM 3, CH 2 (eight innings)
With the game tied at 2-all in the bottom of the eighth inning, with both sets of fans and teams cheering at the tops of their lungs, T.R. Miller’s Krystal Bell delivered a one-out hit to give T.R. Miller a 3-2 win and the tournament championship Thursday.
The Lady Tigers trailed Cottage Hill 1-0 after the first inning and 2-0 after the second inning before scoring two runs in the fourth inning to tie the game up at 2-all. After both teams failed to score the rest of the game, the teams went into extra innings.
In the eighth inning, T.R. Miller used two Cottage Hill errors to load the bases with one out. That’s when Bell’s hit scored Douglas from third to give the Lady Tigers the win.
Austin earned the pitching win for T.R. Miller as she relieved Brundidge in the second inning with no outs. Brundidge went one inning and allowed one hit, two runs, walked four and struck out one.
Austin went seven innings and allowed three hits, no runs, walked one and struck out three.
T.R. Miller had only three hits in the win as Floyd had a single and Grace Ruzic had a double. Bell had the game-winnings single and RBI and added another RBI in the fourth inning.