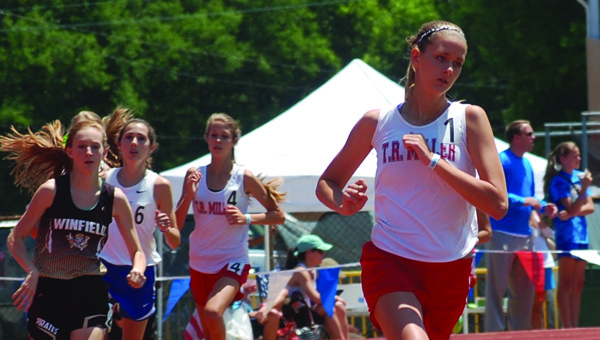 T.R. Miller Lady Tiger Karisa Nelson broke three state records at the state track meet Friday and Saturday to help lead the Lady Tigers to the 2014 championship.
Nelson helped lead the Lady Tigers to the crown as she won the 800-, 1,600- and 3,200-meter runs. Nelson set new girls Class 3A records in all three events.
Nelson, a Samford commit also won the 2013 girls 3A cross country title for the fifth straight time in the fall. Nelson racked up a total of 30 points—of T.R. Miller’s 153 total.
“It is a dream come true,” Nelson said. “My senior track season was exactly what I had hoped for and more because of breaking the records. A lot of hard work went in it from everyone on the team and Coach A (Rob Atkinson) and Coach (Eddie) Brundidge did a great job preparing us mentally and physically for state.”
Nelson said her sister Katie deserves some of the credit behind her success.
“My twin sister Katie has always been by my side, not just as a teammate, but a training partner,” Karisa said. “She deserves credit for all her contributions she has made through the many seasons together. I also want to thank the community for all their support over the past six years.”
Nelson met the national silver standard performance level with her record times in the 1600-, 3200- and 800-meter runs.
Nelson ran a time of 4:49.71 in the 1600-meter run, 11:01.21 in the 3200-meter, and 2:18.27 in the 800-meter run.
Brundidge said he could not say enough about Karisa.
“She has been great over the last six years starting as a seventh grader,” he said. “I would have to sit down and tally up on paper what she has accomplished for us as far as first place finishes and wins. To be able to come in here this year and stay focused all year, even after having signed with a good school (Samford), she didn’t let that bother her and she stayed focused all year long.”
Brundidge said breaking records was a goal for Nelson.
“To be able to break three records in two-day’s time in distance like she did, that’s amazing,” he said. “The 800 record was a record that had been standing for around 14 years I think. For her to come in here and do that, she has gone above and beyond everything she has been asked to do and she is going to be greatly missed.”