WSN football to travel to Jacksonville, Florida week one 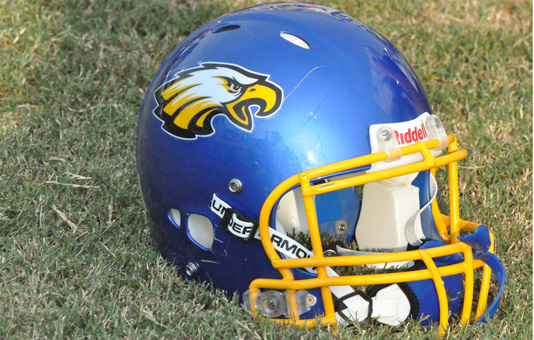 If you want to see the W.S. Neal Eagle football team in action in their first game of the 2014, you will need to plan for a long trip to Jacksonville, Florida.
W.S. Neal head football coach Doug Hoehn has released his team’s football schedule for 2014 and the Eagles will open up the season with a long road trip to play Bishop Snyder High School in Jacksonville.
“Our first game of the year will be against Bishop Snyder,” Hoehn said. “They had a good season last year. I am not sure what they have coming back, but I have talked to the coach and they lost their quarterback who was a good player for them. He has a couple of kids coming back including a big and strong kid at lineman. He is about 6feet 7 inches or 6 feet 8 inches tall and over 300 pounds. He is highly recruited. We will know more about them when we get some film on them after their spring game. They will come to us next year. I think they have about 150 or 160 more kids enrolled in their school than we do.”
Hoehn said when the schedule came out from the AHSAA, he knew the region and classification his team would be in, but it made it hard to find extra games.
“We are in a seven-team region, so that means we would have to find four non-region games,” he said. “Of course, we will always find one of them with our T.R. Miller game, but then we had to find three other teams. The way that worked out is mostly, you would match up with another seven-team region. Well the 3A seven-team region is Miller and we have them. We are the 4A seven-team region. The 1A and 2A seven-team regions, we just couldn’t get a game with them. If you look at the 6As, there were a couple of them, but they were large schools and Bishop Snyder is more our size. They would basically be in our classification if they were in Alabama. I thought that was a game we could match up with and the kids are excited about it.”
Hoehn said he has done an out-of-state game at other schools he has coached in Mississippi, Tennessee and Virginia.
“I used to do this at the other schools I have coached at after I had been there awhile,” he said. “We would take one trip a year out of state to play another school and the kids like it. It just gives them some other kinds of exposure to go play someone else and let folks know about them. I think it will be a good experience for them.”
As for the other teams on the schedule, Hoehn said there are some he has played, and others he has not.
“We have not played Atmore in two years, and they have a new coach since we played them,” he said. “We don’t know exactly how they will be yet. We have never played Clarke County since I have been here and I will have to wait until I get some film on them. We have played UMS-Wright and they have a very good program and are very well-coached. I have never played or seen Calhoun. We have played Monroe County, but they have a new coach since the last time we played them. At this time, I don’t know what they will be running. We have played Thomasville and they are another very good program and are very well-coached. Satsuma, I have not played or seen. We have played and are familiar with Southside-Selma. We played them last year. Then we have T.R. Miller who we play every year.”
Looking at the schedule, Hoehn said he knows UMS-Wright will be a very tough game and Thomasville will be a tough game.
“Miller is going to be a big rival game as usual for us,” Hoehn said.
W.S. Neal’s region opponents will be Clarke County, UMS-Wright, Monroe County, Thomasville, Satsuma, and Southside-Selma.
W.S. Neal will start their spring training period on Mon., May 12. As of right now, W.S. Neal has no opponent for a spring jamboree. As of now, unless an opponent becomes available, an inters quad game will be played to conclude the training period.
Their football and other sports banquet will be Tues., May 20, at 6 p.m. in the school’s auditorium.
Here is W.S. Neal’s schedule for 2014:
• Aug. 22, Bishop Snyder High School, Away (Jacksonville, Florida)
• Aug. 29, Escambia County, Home
• Sept. 5, *Clarke County, Away
• Sept. 12, OPEN
• Sept. 19, *UMS-Wright, Home
• Sept. 26, Calhoun, Homecoming
• Oct. 3, *Monroe County, Away
• Oct. 10, *Thomasville, Home
• Oct. 17, Satsuma, Away
• Oct. 24, *Southside-Selma, Home
• Oct. 31, T.R. Miller, Away
*Region
*** All games start at 7 p.m.