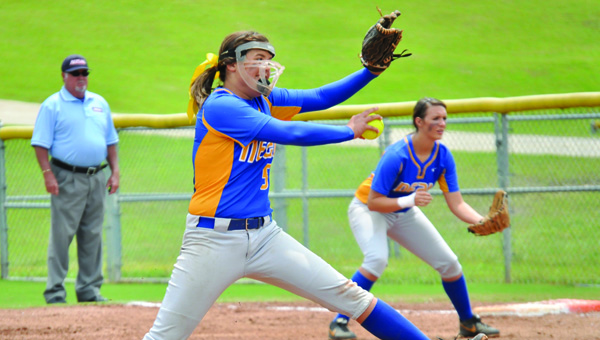 With no juniors on the 2014 W.S. Neal Lady Eagle softball team, three W.S. Neal seniors saw their high school softball careers end Thursday at the Brewton YMCA Sports Park.
The W.S. Neal Lady Eagles softball team went 1-2 in the class 3A area 1 softball tournament Thursday in Brewton and fell short of qualifying for the South Regionals in Gulf Shores for the second straight year.
“We struggled offensively all day today really,” W.S. Neal Lady Eagle head coach Jeff Haney said. “We scored three runs this morning against Cottage Hill. Our pitching was strong and we shut them out. We struggled at times against (T.R.) Miller and scored a run here and there. We just scattered too many hits. We didn’t get enough together.”
Haney said he thought pitcher Haleigh Dubose did a good job of pitching all four games Thursday.
“I thought Haleigh did a good job pitching for us today,” he said. “Throwing that many games back-to-back can be stressful on anybody, especially a freshman. We just have to mature and be ready to do it again next year. I am disappointed obviously. I hate it for our seniors. They have been there for us. We only have three of them and we don’t have any juniors, so they have been the leadership of the team. I hate it for them.”
W.S. Neal opened their tournament with a 3-0 win over Cottage Hill, but lost to T.R. Miller 7-4 and to Cottage Hill later in the day by a score of 4-1. The losses ended W.S. Neal’s season with a 17-14 overall record.
The Lady Eagles had only nine total hits on the day in three tournament games.
In the loss to T.R. Miller, the Lady Eagles trailed the Lady Tigers 5-1 before rallying to cut the lead to 5-4.
When it looked like W.S. Neal would head into the bottom of the seventh inning trailing their rival by only one run after getting the third out of the inning by throwing a runner out at the plate, an obstruction call was called against W.S. Neal after T.R. Miller’s runner was interfered with trying to score.
T.R. Miller ended up plating two runs in the inning and held W.S. Neal scoreless in the bottom of the inning to get the three-run win. While W.S. Neal failed to score in their part of the seventh, Haney said the obstruction call affected his team and took away any momentum they had after throwing the Lady Tiger runner out at the plate.
“I think it took the wind out of our sails,” Haney said. “I think if we get that out without the obstruction call, I think we keep the momentum our way. They did a great job the whole game. We have to play a full game. We just can’t play a few innings. We can’t come from behind, but yeah, I think the obstruction call hurt us. It is what it is.”
As for the season, Haney said it is disappointing.
“We had goals and after a region trip last year and we wanted to do that again this year,” he said. “Not reaching that goal is disappointing. All we can do is get back to work and do it again next year.”

WSN Lady Eagles 3, CH 0
Haleigh Dubose pitched a complete game two-hitter for W.S. Neal in their first game against Cottage Hill Thursday in the tournament to lead the Lady Eagles to a 3-0 win.
W.S. Neal scored one run each in the first, second and sixth innings to get the win.
Dubose went seven innings and allowed two hits, no runs, walked three, hit one and struck out seven.
At the plate for the Lady Eagles, Tori Wyatt had a single while Dubose had an inside-the-park homerun in the first inning. Christina Robinson added a single while Kaeli Brown had an RBI double in the sixth inning.
KeKe Floyd had an RBI single in the second inning.

Cottage Hill 4, WSN Lady Eagles 1
Cottage Hill jumped on W.S. Neal early with two runs in the third inning and added one more in the fourth and fifth innings while W.S. Neal’s lone run came in the bottom of the seventh inning, to get a 4-1 win over the Lady Eagles.
Once again, W.S. Neal’s bats struggled as they only had three hits in the loss. Tiffany Robinson led W.S. Neal with a single and a double and one RBI. Dubose added a single in the loss.
Dubose once again went the distance in the pitching circle and allowed nine hits, four runs, one earned, walked three and struck out seven in seven innings of work.