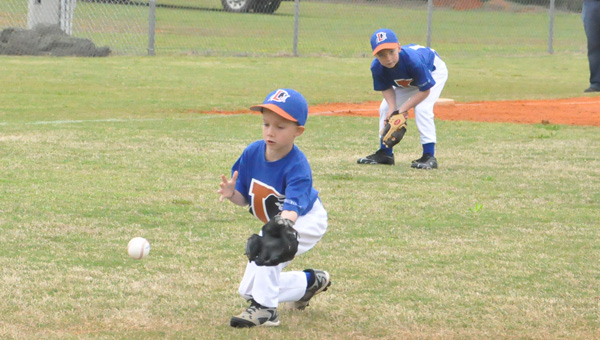 The East Brewton softball Giants took a 12-11 loss to the Thunder in their recent game while the East Brewton Bulls picked up two wins to move to 4-5 this season. The Bulls doubled up the Brewton Eagles 8-4 while getting a 7-6 win over the Kings.
In another recent game, the EB Mariners took down the EB Braves 11-4.

Thunder 12, Giants 11
Leading the Thunder 11-10 heading to the bottom of the fourth inning, the Giants gave up two runs in the bottom of the inning to suffer a 12-11 loss.
The Thunder led the Giants 6-4 after one inning and 10-8 after the second inning. Both teams went scoreless in the third inning until the Giants plated three runs in the top of the fourth to grab an 11-10 lead. The Thunder would go on and scored two runs in the bottom of the inning to get the two-run win.
For the Giants, Briana Pugh had a double and a triple and one RBI while having two stolen bases. Dominique Jackson added one hit and had five stolen bases while Bailey Cooley added one hit and one stolen bases. Tatum Reeves finished with a double and two stolen bases.
Taylor Peters and Caitlin Hartsel pitched in the loss and allowed 12 runs on five hits, struck out one, walked 12 and hit three batters in four innings of work.
No information was reported for the Thunder.

EB Bulls 8, Brewton Eagles 4
The EB Bulls picked up their third win in a row as they doubled up the Brewton Eagles 8-4.
Leading 4-3 after the top of the fifth inning, the Bulls scored four runs in the fifth to blow the game open and help them get the win by four.
J.T. Jerkins was 3-for-3 at the plate along with Eli Stone. Stone added one homerun and two RBIs.

EB Mariners 11, EB Braves 4
The East Brewton Mariners scored in every inning but one to cruise to a 11-4 win over the EB Braves.
The Mariners held the Braves to two runs each in the first and fifth innings while scoring four of their own in the first and fourth innings and adding one in the third and two in the fifth.
At the plate for the Mariners, Jordan Sims had three triples while Jordan Crane had a double and one RBI. Gavin Leggett added a single and a triple and had one RBI while Dustin Godwin had two RBIs. Walker Hoomes had one RBI while Mario Lane finished with a homerun and three RBIs.
Gaige Moulder added a single and one RBI while Langham Parr had one RBI and Caleb Peters scored one RBI.
Hoomes and Sims pitched in the win with Sims being the pitcher of record. The duo went five innings and allowed two runs on four hits, walked five and struck out eight.