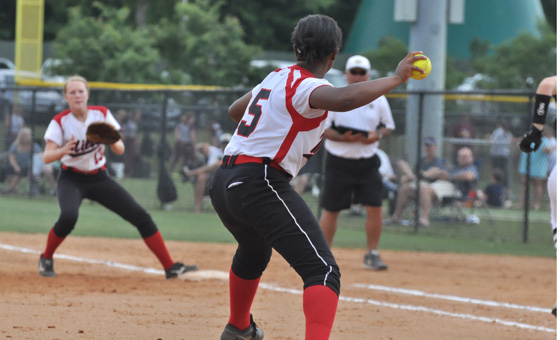 TRM Lady Tiger senior pitcher Moriah Brundidge, right, throws to other senior Abbi Roberts as she covers first on a bunt against Straughn Saturday at the South Regionals in Gulf Shores.

The T.R. Miller Lady Tigers softball team saw their 2014 season come to an end Saturday in Gulf Shores as they suffered an 8-3 loss to Straughn. T.R. Miller finished their season with a 20-10 record.
The Lady Tigers opened play in the regionals Friday with a 3-1 win over Pike County. In their second game Friday, T.R. Miller lost 10-0 to Geneva in five innings to fall in the loser’s bracket. Saturday’s loss to Straughn ended T.R. Miller’s season.
T.R. Miller’s 2014 softball team saw 15 players finish out the season with two being seniors, one junior, no sophomores, four freshmen, five eighth graders and three seventh graders.
Moriah Brundidge and Abbi Roberts were the two seniors while Krystal Bell is the lone junior.
Caitlyn Smith, Madison Douglas, Taylor Austin and Grace Jennings are all freshmen while Anna Kate Brittain, Steel Ruzic, Morgan Longmire, Mary Madison Peace and Myra Reiss are eighth graders.
Gabbi Soloman, Madison Floyd and Anna Grace White are the seventh graders.
Be sure to see Wednesday’s edition of The Brewton Standard and a later post on our Website to read full game recaps and to read comments from head coach Greg White.