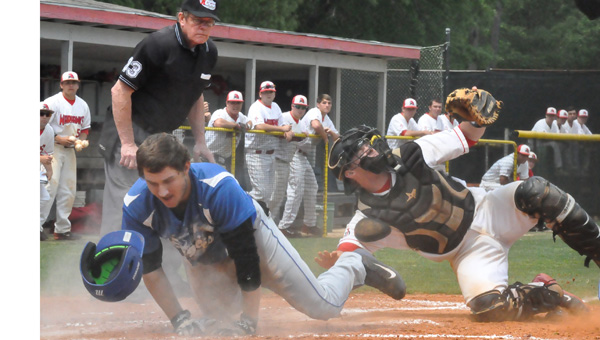 JDCC Warhawk baseball catcher Alex Jones makes a play at the plate against ASCC earlier in the season in Brewton. ASCC ended JDCC’s season Tuesday at state with an 11-0 win. JDCC finished fourth in the state.

From fourth place in their own division to fourth place in the entire state of Alabama: That’s what the Jefferson Davis Community College Warhawk baseball team did Tuesday as they finished fourth in the state after falling to Alabama Southern 11-0. The loss finished JDCC 24-24 overall for the season.
In the game Tuesday Garrett Davis took the loss on the mound for the Warhawks as he went three innings and allowed eight hits, five runs, three earned, walked one and struck out one.
Tyler Henry went four innings and allowed nine hits, six runs, three earned, walked one, hit one and struck out one.
At the plate, Dake Rivers went 2-for-3 along with John-Mark Cosby. Michael Fox went 1-for-3 with a double while Tanner Zant and Brandon Goins were both 1-for-2.
The game for JDCC was their fifth straight at the state tourney. The Warhawks posted a 3-2 record in the tournament after dropping their first game to Shelton State on Friday. The loss to Alabama Southern was JDCC’s fifth in six games against the Eagles this season.
Alabama Southern went on to defeat Faulkner State later in the day Tuesday by a score of 12-4 to clinch a spot in the title game Wednesday against Chatt. Valley. Alabama Southern would have to defeat CVCC twice to win the state championship.