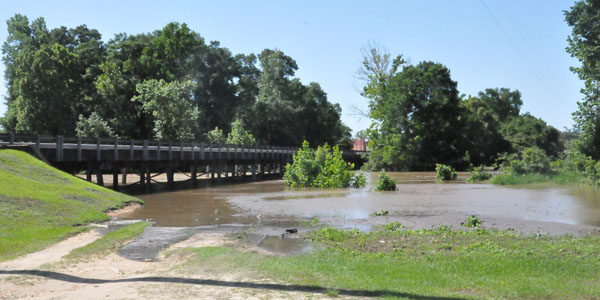 The torrential rainfall from Wednesday is making its presence known in the Brewton area as waterways continue to rise.

“Murder Creek is still rising a bit,” Adams said. “It’s sitting at 21.9-feet with a forecasted crest of 22.2 feet. Originally (weather officials) gave a 24-foot crest, which worried me.

“But right now, we’re within inches of cresting,” Adams said. “I don’t think, at this point, we’re going to have to close the road, but things can change. I don’t want folks to get a false sense of security.”

Waters at Burnt Corn Creek have made its way into Jennings Park, and on Thursday afternoon, residents were seen getting a closer look.

Adams said the creek is “dropping,” which is good news.

“It’s already dropped a foot at the (Ala. Hwy. 41) crossing, so it’s definitely falling,” he said. “Murder Creek will soon be at its crest and falling shortly. Hopefully we’ll miss it all, but it’s extremely close.”