11 jailed in EBPD round up 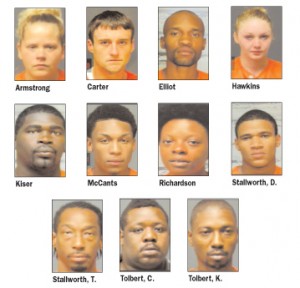 East Brewton Police have gotten more than a dozen people — 10 adults and two juveniles — and an array of drugs off the streets after a series of investigations spanning nearly two months came to an end last week.

Police Chief Kenny Brazile said investigations are continuing into other complaints that illegal drug activity is taking place in the city.

“No matter the amount of drugs – large or small – we are still fighting to get drugs off our streets,” Brazile said. “We are continuing to investigate suspicious activity and complaints made by residents in the city and expect to continue to make arrests. There will be more to come.”

“We had received information that a lot of illegal drug activity had been taking place at that residence,” Brazile said. “Our officers have been watching the area and noticed that a large group of people had gathered in the yard of the residence Thursday night.”

Brazile said a search of the area produced both marijuana and synthetic marijuana.

Earlier in the week, Brazile said a routine traffic stop resulted in the arrest of another adult.

Jeremy Elliott, 33, was arrested after officers discovered marijuana and drug paraphernalia in the vehicle of the suspect, Brazile said.

Other arrests made during the lengthy investigation were:

• Sacore McCants, 19; and an unidentified 17-year-old juvenile — both charged with conspiracy to commit a controlled substance crime and possession of drug paraphernalia. McCants also faces charges distribution/furnishing drugs to a minor in the case.

On another routine traffic stop, Brazile said two women were arrested and are now charges.

Tiffany Barton Richardson, 31, and Kristen Armstrong, 22, are facing second-degree possession of marijuana in connection with a search conducted at the time of the traffic stop.

Three adults and an unnamed juvenile were taken into custody following a routine traffic stop that resulted in the discovery of marijuana and cocaine in the vehicle in question, Brazile said.

“All of the suspects will be facing drug charges and Carter will face an additional charge of escape,” Brazile said. “After the four had been taken into custody and were handcuffed, Carter attempted to run from officers at the scene. He was captured immediately and was taken into custody again.”

Carter, Stallworth, Kizer and the juvenile all face charges of second-degree possession of marijuana and possession of a controlled substance-cocaine, Brazile said.