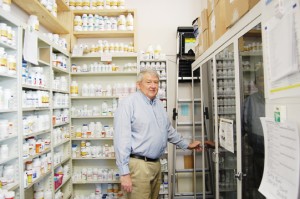 For the last 30 years, it’s been all about the people for Danny Cottrell and his staff at Brewton Medical Center Pharmacy.

And there’s no plan to change that philosophy any time soon, Cottrell said as he and others celebrated the business’ three decades of business.

Purchased by the Cottrell’s in 1984 with seven employees, the pharmacy – which is housed in the medical complex off Belleville Avenue – has grown to a staff of 15 full-time and two part-time employees and filling 155,000 prescriptions a year.

“We’ve been very fortunate,” Cottrell said. “Brewton has been good to us.”

Cottrell began his career at the pharmacy at 15. It’s the only pharmacy he’s “drawn a paycheck” from in his adult life, he said.

On the first day of eighth grade football practice, Cottrell said he broke his leg – so bad, the leg is now 1 ¼ inch shorter than the other. When it came time to choose a career, Cottrell said, “I knew that I could up a stool if I needed to, and pharmacy had always interested me.”

What he didn’t realize then was how much the business side of the pharmacy would interest him, he said.

While attending school at Auburn, Cottrell traveled home to work every weekend at the pharmacy. He soon donned a white coat, all the bookkeeping duties and later the ownership of the pharmacy. Cottrell’s partner, Tom Henderson, joined in 1992.

“It was a learn-as-you-go kind of experience,” Cottrell said of becoming a businessman. “My wife, Karen, and I knew it was a good opportunity when we were able to purchase the pharmacy. She always says that when I got to old to play softball and basketball, I turned my competitiveness to business. I just do what I can to help people.”

And throughout the years, Cottrell has done a lot to help local residents. When changes came to Medicare and insurance coverage, Cottrell was there with explanations and guidance. When the economy took a dive, he and his $2-bill stimulus experiment – which garnered national news coverage when Cottrell gave each of his full-time employees cash bonuses in $2 bills – showed Cottrell was there for his employees, and again, the community.

As technology and times changed, so did the pharmacy. In 1985, Cottrell purchased Moorman’s Pharmacy and brought on the late Hubbard Owens, who passed from cancer in 2009. When K-Mart and the East Brewton pharmacies closed, the BMC Pharmacy’s client roster grew even more.

Inside are two robotic machines that fill prescriptions, which help to reduce the staff workload and get customers out the door in a quicker fashion.

Lois Crenshaw has worked for more than 30 years at the pharmacy.

“I’ve done everything here,” she said. “I started as a bookkeeper, then a pharmacy tech and now I’m delivering meds. I love it. I love working here. You couldn’t ask for a better place to work or better people to work with.”

When Cottrell was asked about the future, he said, “I’m way to young to retire. My wife and I would drive each other crazy. As long as we can do some good, we’ll see how long we can hang around.”