A Brewton man is dead and another charged with an open count of murder in a Memorial Day shooting.

Chief Deputy Mike Lambert with the Escambia County Sheriff’s Office said 30-year-old James Larry Johnson is being held on a $100,000 bond in the shooting death of 31-year-old Christopher Adam Salter.

“At approximately 8 a.m., deputies responded to a 911 call at the victim’s ALAFLORA Road residence in reference to an alleged shooting,” Lambert said. “Whey they arrived, they found Mr. Salter inside the residence 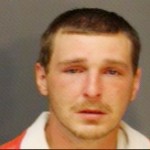 “From what we know, Mr. Johnson’s wife and Mr. Salter share a child,” he said. “She was at the residence at the time of the shooting.”

Lambert said that shortly after deputies arrived, Sheriff Grover Smith was able to make contact with Johnson, who later surrendered himself at the ESCO.

Lambert said it is believed that Johnson is also being held on a violation of probation charge stemming from a previous domestic violence conviction; however, court records were unavailable as the county circuit clerk’s office is closed on Wednesdays.