A lot has been made in the last few hours about Jamey Dubose’s sudden departure from Charles Henderson in Troy to Central-Phenix City.
I am not going to go into my thoughts in Dubose’s decision other than he said he and his family put a lot of time and prayer into the decision and he decided to do what was best for his family. Hard to fault a guy for that other than it looking bad on his record for the amount of jobs he has had over the last few months.
Al.com has had several stories on Dubose’s decision as had our sister paper The Troy Messenger.
While reading one of Al.com’s stories on the issue, I came across Josh Bean’s column. Josh and his wife Kerry used to live in Brewton and Kerry was the publisher here at the paper. They recently moved to Birmingham due to a promotion for Josh within the company of Al.com.
Here is Josh’s column on the Dubose situation: http://highschoolsports.al.com/news/article/870700711085380421/does-jamey-duboses-move-to-central-phenix-city-mean-loyalty-no-longer-matters/
After reading Josh’s column, I got to thinking what is the longest tenure one coach has had at one particular school?
A site many sportswriters from across the state are familiar with—and some fans might be as well—is the website ahsfhs.org. If you are not familiar with the site, I recommend you check it out. It is full of all kinds of information.
While on the site, they had just the information I was looking for: http://www.ahsfhs.org/articles2013/coaches1.asp
While looking at the site, there are nine currently active coaches who have been at one school for over 24 years or more. One of those coaches is T.R. Miller’s Jamie Riggs. Riggs has been at T.R. Miller for 25 years and has a record of 261-56. He is currently sixth on the active list and second on the list for most wins at one school.
The longest tenure at one school all-time, according to ahsfhs.org, is Woody Clements at Holt. Clements coached 41 years and went 238-167-7.
Pretty interesting!!
Riggs will begin his 26th year at T.R. Miller in 2014. Straughn head coach Trent Taylor, a school T.R. Miller fans are familiar with as the two teams have been paired in the same region for many years as of late, will begin his 25th season at Straughn in 2014.
Here is Riggs’ record at T.R. Miller:
http://www.ahsfhs.org/teams2/coachestop1.asp?Coach=Jamie%20Riggs&Team=T.R.%20Miller
What are your thoughts on the whole situation: Dubose, Riggs, loyalty and coaches? Feel free to share your comments on the situation.
Well, until we meet again here or out in the world of sports, God bless. 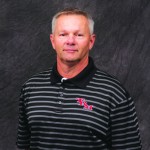 Here is a story on TRM’s Riggs back in 2008 when he was about to start his 20th year at the helm as T.R. Miller’s head football coach. In the following story, Riggs comments about what has kept him at T.R. Miller for so long.:
When T.R. Miller Tiger head football coach Jamie Riggs steps on the football field Friday night in Atmore, he will begin his 20th season as head coach for the Tigers.
Riggs, one of the most successful coaches in the state of Alabama, has compiled an overall coaching record of 223-63 in 19 seasons at T.R. Miller and three seasons at Opp.

While 20 years is a long time for a coach to stay with one team, Riggs said one thing has kept him there.
“I have been here all these years because one thing has really stuck out above the others,” he said. “That one thing is the players here. Football has been important to them and they have had this spirit about them that has made coaching fun. It has been work now, a lot of late nights, but the players here have been the reason I wanted to coach. I have had some opportunities to do some other things, but I have not found anything better than this yet.”