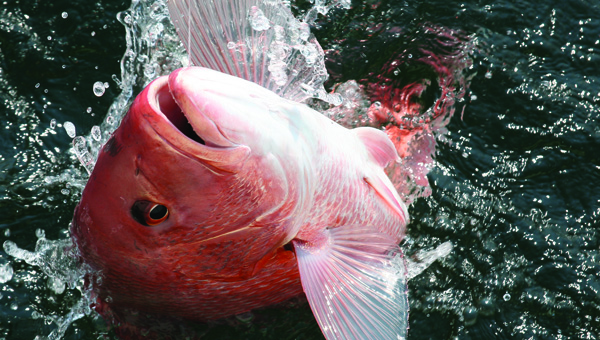 By DAVID RAINER
Alabama Department of Conservation and Natural Resources

With all the fishing friends I have, it’s not surprising my Facebook page is awash with red right now, as in red snapper.

So how can an Alabama angler legally catch red snapper in Florida waters? It gets a little tricky, especially for the boat captain.

Chris Blankenship, Director of the Alabama Marine Resources Division, said there are specific regulations that Alabama fishermen must follow to be in compliance with state and federal regulations.

“If people from Alabama are going to fish in Florida and catch red snapper and bring them back to Alabama, they need to stay in Florida waters until they get to 3 miles off the beach,” Blankenship said. “Then they can cut over into Alabama waters. We will allow them to possess fish in Alabama as long as they have an Alabama saltwater fishing license and a Florida saltwater fishing license.”

Therefore, if an Alabama boat is 9 miles south of, say, Gulf Breeze, Fla., the boat cannot take a course that is a straight line back to the Alabama port or boat ramp, because that course would take them into federal waters. And it doesn’t matter where the fish was caught. Possession is the key.

“If you get caught in federal waters with red snapper, that is a violation,” Blankenship said. “You’ve got to stay in Florida waters until you get to Alabama waters.”

Blankenship said there will be a variety of enforcement personnel out to ensure compliance with state and federal regulations.

“We’ll have patrols in the Gulf, as will other states, the Coast Guard and National Marine Fisheries Service (NMFS),” he said.

Anyone who lands red snapper in Alabama, whether or not the fish is caught in states with seasons outside the federal regulations like Florida, Louisiana and Texas, is required to report the catch to Alabama Marine Resources through the new red snapper data collection program. The new system requires only one report per vessel trip, which can be filled out via smartphone app, online, by telephone, or by paper form. Data collection drop-boxes have been erected at boat ramps at Boggy Point, Cotton Bayou and Fort Morgan in Baldwin County, Billy Goat Hole on Dauphin Island and Bayou La Batre in south Mobile County.

N. Gunter Guy Jr., Commissioner of the Alabama Department of Conservation and Natural Resources, enacted the red snapper data collection program through emergency regulation to ensure its quick implementation because of the impact snapper fishing has on Alabama’s estimated $690 million recreational fishery.

The new regulation requires the captain or owner of a charter or private vessel with red snapper on board to report all red snapper kept and discarded dead prior to landing in Alabama.

When the red snapper catch is reported, additional information required includes: vessel registration number, type of vessel (private or charter), county where the fish was landed and number of anglers.

Anglers can report red snapper catches via the Outdoor Alabama smartphone app available in the iTunes or Google Play app stores, online at outdooralabama.com, by telephone at 1-844-REDSNAP (1-844-733-7627), or by paper forms available at the aforementioned boat ramps. The proper smartphone app is powered by Pocket Ranger.

Blankenship said red snapper anglers have expressed their intent to comply with the red snapper data collection program because they want accurate information to be used when seasons and bag limits are set.

“NMFS changed its data collection program in 2013,” Blankenship said. “We don’t feel that program is accurately reflecting the red snapper that are being landed on the Gulf Coast. So in order to get a true picture of what’s actually being landed in Alabama, we’ve implemented the red snapper reporting system. Once we have the information for what’s truly being landed, we will have a much higher confidence in the results as we move forward to show we are ready and able to manage this fishery on a state level.

“But more importantly, there’s a buffer that comes off the top of the quota for management uncertainty under NMFS. If we have a true picture of what’s being landed, that 20- to 25-percent buffer can be added back into the quota in future years.”

When it comes to discarded red snapper, Blankenship said anglers should use their best judgment as to whether they think the fish will survive after being released.

Blankenship said most of the feedback he’s received from anglers about the reporting system is for more information, not complaints.

“People want to comply, but they want to know all the details before they go out,” he said. “I don’t blame them. They don’t want to be sitting at the dock, trying to figure this out. But we did make it very user friendly, so it shouldn’t be much of an inconvenience to the fishermen at all.”

Blankenship said the data collection system is designed to get quick results from the reports.

“It is a fineable violation if people don’t comply. We’re really working hard to educate people that they need to report red snapper catches.”

Also, the vermilion snapper bag limit has been reduced to 10 per person as part of the 20-fish reef fish aggregate.

Blankenship hopes that the results from the red snapper data collection system will allow Marine Resources some leeway with snapper fishing, possibly this year.

“We’ll be monitoring the reporting and use the information to consider a supplemental season in state waters later in the year,” he said.

“We went out with Congressman Byrne and Congressman Scalise for a few hours and we talked about our request for a 9-mile state boundary for fisheries management,” Blankenship said. “We’re still waiting on Congress to take action, but Congressman Byrne sounded confident that he could get it done.”