The 10U Cal Ripken baseball all-star district tournament will begin on Thursday, June 19 in Opp.
A total of six teams will play in the tournament as Opp, East Brewton, Andalusia, Covington County, Brewton, and Evergreen will all play.
Tournament games will begin at 6 p.m. Thursday when Andalusia and Covington County will square off followed by Opp and East Brewton at 8 p.m. Brewton and Evergreen have a first round bye.
Games will continue Friday when the Opp/East Brewton winner from Thursday will tangle with Brewton at 6 p.m. At 8 p.m., the Covington County/Andalusia winner will meet Evergreen.
Saturday’s games will begin at 10 a.m. when the Opp/East Brewton loser from Thursday will meet the loser of the Brewton versus Opp/East Brewton winner’s game from 6 p.m. Friday. At noon, the Covington County/Andalusia loser from Thursday will meet the loser of the Evergreen versus Opp/East Brewton winner’s game from Friday at 8 p.m.
At 2 p.m., the winner’s bracket game will be played followed by the winners in the loser’s bracket games squaring off.
On Sunday, the loser’s bracket game will be played at 4 p.m. and the championship game will be played at 6 p.m.
The if-needed game (6 p.m. Sunday loser has only one loss), a deciding game will be played Monday at 6 p.m. for the tournament championship.
No other all-star tournament information for any other ages has been received.
Please send your all-star team’s tournament information and a list of players and coaches on the team to: sports@brewtonstandard.com or fax the information to: 251-867-4877. 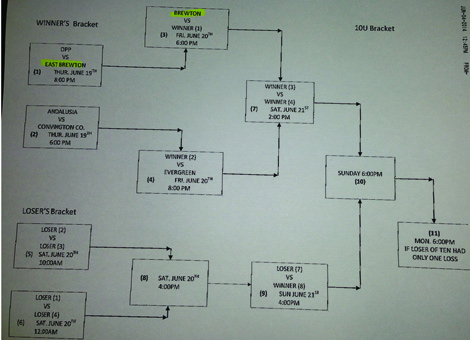