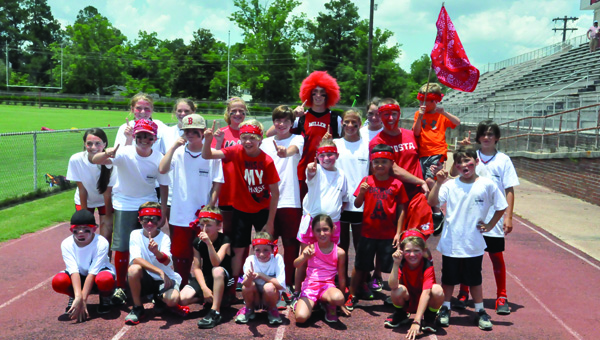 The 9th annual Brewton-area Fellowship of Christian Athletes (FCA) Kids Camp, a popular summer tradition in the area, will take place June 16-19 at the T.R. Miller campus.
The FCA Camp is designed to help give children who have completed 1st grade through those who have completed 6th grade an opportunity for a Christian camp environment that balances both athletic competition and character/integrity development with the message of Jesus Christ.
The theme for the 2014 camp is “Focus” and is based on Jeremiah 29:13: “You will seek me and find me when you seek me with all your heart.”
The camp is staffed by high school athletes and coaches who have a love for athletics and children. Cost is $20 and begins at 8 a.m., Monday June 16 and 9 a.m. on the remainder of the days. Money for the camp is due by Tuesday, June 10.
FCA has been touching millions of lives since 1954. It has been challenging coaches and athletes on the professional, college, high school, middle school and youth levels to use the powerful medium of athletes to impact the world for Jesus Christ. FCA is the largest Christian sports organization in America.
Locally, Randy Winton with Brewton’s First Baptist Church heads up the camp for the week. He had worked a similar camp in Chattanooga, Tenn., for a number of years and after moving to Brewton in 2001 had a vision for the camp here.
“This is a perfect community to do a camp like this,” he said. “Athletics is such a big part of Brewton and its people and the kids who come every year love all aspects of the camp.”
Winton said the camp is two-fold as it gives the kids the opportunity to participate in different sports and learn about the message of Jesus Christ through all aspects of life, but it also gives our teenagers (some who are former FCA Campers) the opportunity to do the right thing and pass that example on to younger kids.
“We have kids who are using gifts they didn’t know they had until they got in a group with sweaty first through sixth graders,” Winton, who points out that the number one goal of the camp is that kids come to know Christ and that he or she is valued and that their lives matter. “When kids are loved and encouraged and see Christ in those around them, they feel safe and enjoy the experience of FCA Camp. Every kids who walks on this campus for camp should leave with, at the very least, that they matter and that there is a Savior who loves them deeply.”
Huddle leaders are assigned to the age groups during the week and serve as coaches to the kids and throughout the week, they are engaged in competitions at six stations played daily on a 15-minute rotation and accumulate points due to winning, losing, or tying.
But the main idea of the camp is that through all the competition and points being accumulated, the most important thing is building character and being an example. At the end of the week, each Huddle Group recognizes someone who has exhibited those characteristics taught by the Fellowship of Christian Athletes with an award for being its “Camper of the Week”. Also, on the final day of the camp, the camp ends with the much-anticipated “Wild Tiger Relay.”
Four years ago, the camp started the Jim Hayes Award for the sixth grader who has been an example of the spirit of FCA and all it stands for over his/her years coming to the Brewton FCA Kids Camp.
In 1988, Hayes attended a Fellowship of Christian Athletes sports camp in Black Mountain, N.C. The T.R. Miller football player told his family and friends the camp changed his life. Just two weeks after the camp, Jim was riding his bike in Destin and was killed after he was hit by a car. He was just 16 years old. Jim was the son of Dr. Bob and Ellen Hayes.
The Jim Hayes Award will be given again this year to a sixth-grade camper at the end of the camp. To be eligible for this prestigious award, a sixth grader has to have attended this camp at least three years and exemplified the pillars of being a Christian athlete and what FCA stands for. Rider Jernigan took home the special award last year.
Winton said locally the camp averages 80 kids and it’s growing and is starting to come full-circle now heading into its sixth year. The local FCA camp is run completely by volunteers who give of their time and effort.
For more information or if you need a camp brochure to register, contact Randy Winton, First Baptist Church youth pastor, at 867-5769 (FBC Brewton) or 363-0429 (cell).
The week’s schedule for the FCA camp is as followed: