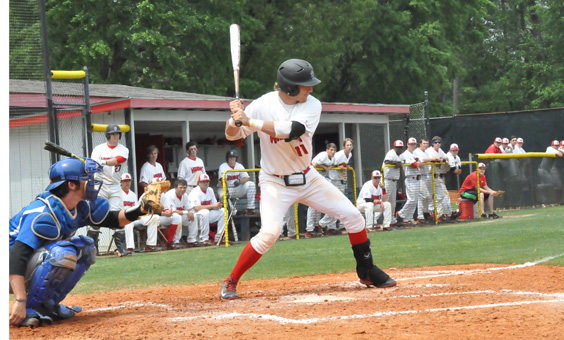 Former Jefferson Davis Community College (JDCC) Warhawk baseball player Logan Hill has been named one of five individuals from Alabama Community College Conference (ACCC) teams were named to the NJCAA, Division I, Baseball All-American Team.
John Holland, ACCC Player of the Year and member of World Series participant Chattahoochee Valley, and Jean Figueroa of ACCC runner-up Alabama Southern headline the second-team. Hill was named to the third-team, with Dalton Rentz, also of Chattahoochee Valley, and Dylan Calhoun of Snead State named honorable-mention.
Hill, who will play at Troy next season, helped lead the Warhawks to a 24-24 overall record in 2014 and a Final Four appearance at the state tournament.
ACCC link:
http://www.acccathletics.com/sports/bsb/2013-14/releases/2014060374anm6 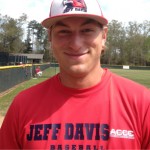 Hill has recently been chosen as a member of the NJCAA Baseball National Team.
The NJCAA Baseball National Team will participate this summer in the 80th NBC World Series in Wichita, Kan. The tournament will take place August 1 – 9 at Laurence Dumont Stadium.
“I’m just extremely proud for Logan to have such a once in a lifetime opportunity,” Blevins said. “This is something that he along with the rest of our players will be able to talk about for years to come. I can just foresee Logan and the rest of our players telling their future children and grandchildren, ‘Yes, I had the opportunity to play for the NJCAA National Team’ or ‘I played ball with a guy who had the opportunity to play for the NJCAA National team’. This is a big accomplishment for Logan and our program as well.”
Blevins said back in September, Hill was injured and suffered a broken leg.
“Logan was in a horrific collision chasing after a flyball, with Hunter Myrick our right-fielder,” Blevins said. “At that time and with the seriousness of the injury, suffering a broken leg, everyone of us were afraid that we may not get him nor Hunter back for our Spring season. We were all afraid that this could actually be the end of their playing careers. We have truly been blessed to get both of these guys back and for them to have such a good season. It has really been fun to watch Logan and the other sophomores develop over the past two years. Everyone sees the physical abilities and the physical skills that Logan has worked hard to develop, but Logan has developed as a person as well. This is very important to me and the rest of our institution, and I’m certain that coach Bobby Pierce and coach Mark Smartt at Troy University are just as excited to be getting such an individual entering their program. I am confident that he will do extremely well for the National Team this summer. It will be fun to follow his progress during this time.”
Each and every summer the National Baseball Congress World Series serves as a showcase for some of the best amateur baseball players and teams in North America. This year the 80th edition of the tournament is sure to continue that proud tradition, especially with the announcement that a national team will compete for the first time in 15 years.
The NJCAA National team, featuring the best players in the country from the National Junior College Athletic Association, will be traveling to Lawrence-Dumont Stadium in Wichita to try to bring home a championship in the 2014 World Series. “We are grateful for the opportunity to participate in this year’s event and would like to thank the NBC and their staff for the invitation and the hospitable nature in which they have approached our group. We are looking forward to a great event,” said NJCAA Baseball Coaches Association President Rick Hitt.
This will be the first time the NJCAA has compiled a national team for tournament play since their entry in the 2010 Honkbal Tournament in Holland. That squad went 2-4 in the international competition, knocking off Chinese Taipei twice.
“The National Baseball Congress is very excited to have the NJCAA National Team compete in the 80th Annual World Series,” said NBC General Manager Josh Robertson. “It will be the first time since 1999 that a USA National Team has competed in the tournament and our fans still remember how exciting it was to have them here.”
In the past four years players from the NJCAA ranks have made a sizeable impact on Major League Baseball’s June Amateur Draft. The 2010 draft featured a record 175 players chosen from NJCAA schools, while there have been at least 93 selected in every draft since. The 2013 draft featured 124 NJCAA draft picks highlighted by the Chicago White Sox choosing shortstop Tim Anderson of East Central Community College in Mississippi with the 17th overall pick. Anderson’s high draft position makes it the third time in four years there has been a NJCAA player taken in the first round.
Many household names in the sport of baseball have started their careers by playing collegiately for an NJCAA program. In fact, nine former NJCAA players participated in the 2013 MLB All-Star Game including big names like Bryce Harper, Cliff Lee, Sergio Romo, Chris Davis, and Craig Kimbrel.
The potential to see future stars isn’t the only reason to pay attention to this group of collegians. “Some players go on to have great professional careers, but what is amazing to me is the constant success stories from all over the country about players making it to college with an opportunity to play collegiate baseball, who lived for that opportunity, took nothing for granted, and made the most of the chance they received to play this great game,” explained Hitt, who is also the head baseball coach at NJCAA program South Florida State. “The experience of being part of the NJCAA National Team is one that the players and staff who participate will always remember.”
Two-time NJCAA National Coach of the Year at Iowa Western Marc Rardin will coach the national team this summer.
“It will be a great experience for everyone to see a fresh new team in the World Series and no doubt some future Major League players in the mix,” Robertson added. “We are grateful to the NJCAA Committee for choosing The National Baseball Congress World Series as the post-season tournament of choice to showcase these talented young men.”
The 2014 NBC World Series will begin on Friday, July 25th and conclude on Saturday, August 9th. The field challenging the NJCAA National Team will include last year’s champion the Seattle Studs, 2007 champion the Wellington Heat, Alaska, and long-time power Prairie Gravel. It is possible that six former World Series champions will be in the field.
Tickets for the 80th annual NBC World Series can be ordered by calling the NBC Baseball Box Office at 316-264-6887.