‘Because it’s what he does’ 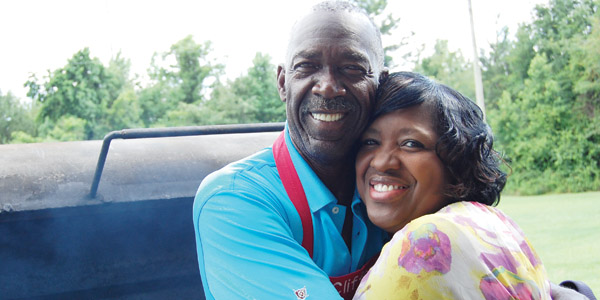 Clifford Watson and daughter Angela Tuesday as they prepare for a catering event.

The love Clifford Watson has for his children – and his community – is as thick as the smoke that billowed out of his famous grill Monday.

As the summer heat beat down on daughter Angela’s back lawn, Watson thought nothing of tending to the chicken that was to feed some 90 Georgia Pacific employees Tuesday.

“It’s because that’s what he does,” said Angela, one of Brewton’s most sought-after caterers and manager of NDI’s Cracked Pot. “I’ve been helping cater for about three years, but I’ve been on my own for about two months. Daddy has been here every step of the way – bringing his grilling all along the way.”

Mr. Watson, who retired from Banktrust Bank, serves as a deacon and a Sunday school superintendent at St. Mark Missionary Baptist Church.

“When it comes time for family reunions or church events, no one has to say anything to Daddy,” Angela said. “He knows what his job is.

“And even when it comes to working with me, I don’t have to tell him anything,” she said. “We are all so close that we don’t even have to talk. We all just jump up and pitch in.

“I do decorating too for events,” she said. “I can say, ‘I think I’m going to do this or that,’ and when I come home, everything I need is laid out, ready to go.

Mr. Watson, who was visibly embarrassed with the compliment, said his motivation is simple.

“I don’t mind it, especially for my daughter,” he said. “It’s not work to me. It’s something I love to do, like I love all my children.”

And that love doesn’t extend just to his children, Angela said.

“It’s for everybody,” she said. “He needs to do it, and it’s good for him. Whatever anyone at church needs, he’s there – especially if there’s a grill involved.”