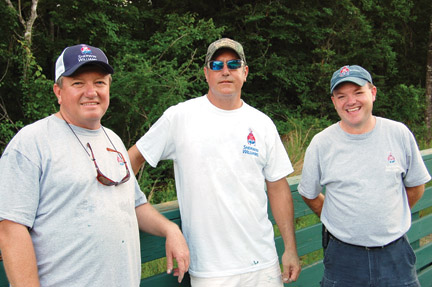 Brown, center, is pictured with David Wilson and Robbie McClelland of Sherwin Williams at the project site.

The boardwalk between Burnt Corn Creek and O’Bannon Park is getting a facelift thanks to the generosity of Sherwin Williams and Brown’s Painting.

“National Paint Week is in April, but logistics and weather pushed the project here back until June,” Wilson said. “For our company, this is a project to show community involvement.”

The local paint store donated 125 gallons, some painting equipment and a supervisor for the project.

Labor was donated by Barry Brown and his Lennox-based company, Brown’s Paint. Brown, his brother, Bruce, and employee, Scott Driver, worked throughout the day to complete the project. City crews worked to clear undergrowth so that painters could work along the bottom of the walkway.

“This is the first opportunity of its kind for us,” Brown said of the project. “This town has taken care of my family for the last 15 years, and I wanted to give back.”

The project was identified by the City of Brewton, and along with the local companies, the vision of a newly-painted boardwalk came to fruition.