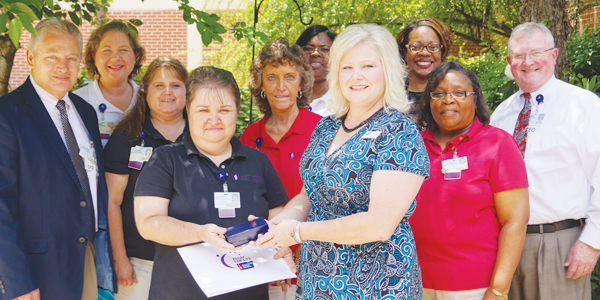 “She believes it’s what people are supposed to do” is how co-workers described the actions that earned Brewton’s Ruthie Cooper the distinction of being naming the American Cancer Society’s Community Volunteer of the Year.

Cooper, who works as director of medical records at D.W. McMillan Hospital, was chosen for her endless support throughout the years to the American Cancer Society.

“Each year, the American Cancer Society staff nominates outstanding volunteers in each community to receive the ‘Community Volunteer of the Year’ award,” said Jason Daniels, DWM director of marketing and public affairs. “And that fit Ruthie to a ‘T.’ She works tirelessly to raise money not only for the cancer society, but also for the hospital’s wheels of wellness program.

“She puts in a lot of extra time to raise money,” he said. “And she doesn’t want any recognition. It’s just what she does. She does things that make a difference because it’s the right thing to do. She has a passion for working on behalf of others. It’s who she is. She’s selfless. She believes it’s what people are supposed to do.”

A selection committee then chooses those volunteers that are leaders in their community who go above and beyond to support the American Cancer Society.

For years, Cooper organized – and continues to organize – the local Relay for Life event. This year, her efforts – and those of fellow residents – help to raise more than $25,000 to support the fight against cancer. Last month, D.W. McMillan was also presented with the 2014 Relay For Life Top Corporate Fundraiser award for raising almost $6,000 – all thanks to Cooper’s organizational skills, said Chris Griffin, hospital administrator.

“We are very happy for Ruthie and the dedication she has shown to supporting the American Cancer Society,” Griffin said. “Ruthie and her team’s hard work is a testament to the dedication D.W. McMillan Memorial Hospital has towards our community.”

Cooper said she felt called to volunteer some 20 years ago after beginning work as a DWM transcriptionist.

“We started tracking tumor cases, and I noticed the number start to rise,” Cooper said. “There was one child – I would see him in the hospital – he had leukemia and it was like I watched him die. I thought, ‘There has to a better way,’ and it broke my heart. That’s when I became involved with the American Cancer Society.

“I’m just doing my part,” she said of her volunteerism.