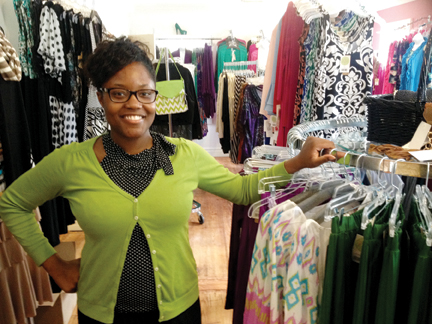 Janova Johnson of The Modest Closet stands among her inventory Monday. The store will hold a grand opening on Saturday at 9 a.m.

Janova Johnson is anything but modest when it comes to describing her dream of owning her own business, The Modest Closet.

The Brewton resident and Reid State graduate said her background in business administration was the first step in making her dream a reality. The second step was convincing her father, Jason Shufford, to help.

For the last eight months, locals have watched the “shack” on Douglass Avenue next to the elementary school transform into a boutique with gleaming display windows and a fresh and contemporary design. Last week, signs of an opening were seen as dress forms donned wares and were put on display.

On Monday, Johnson announced she would hold a grand opening on Saturday at 9 a.m.

“My dad always wanted to start a business with horses, but he never found the time,” Johnson said of her dad who retired as a correction’s officer at Holman Prison and who now works as a fulltime pastor at Apostolic Truth Tabernacle. “But he decided to join me and help me.”

The boutique’s physical transformation is a credit to Shufford’s talents as a carpenter. Johnson said she now hopes she can do her part to make the business a success.

“Our focus is modest clothes,” she said. “It’s stuff that can’t be found here in Brewton – shoes, purses, scarves, regular sizes and plus sizes, and even dressier children’s clothes.

“This is not a consignment shop,” she said. “Everything’s new. Dad has been building his vision, and now we’re working on mine. We brainstormed together and jumped in head first.”

Johnson said she began her retail career with a consignment booth at Brewton’s Twice the Treasure. When she saw success, she decided to expand her business.

“I thought, ‘I can do this. I could get a shop, and I can do it,’” she said. “From there, I ordered a couple cases of different clothes and started selling it myself at church or wherever the opportunity came up. When that stated selling well, I talked with my dad, and that’s when we decided to open the shop.”

The Modest Closet will open Saturday and regular store hours are Monday through Friday from 10 a.m. until 5 p.m.; Saturday from 9 a.m. until 4 p.m.; and closed on Tuesday and Sunday.