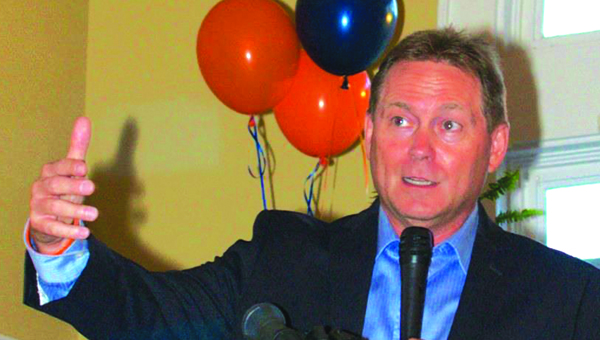 Scott Fountain speaks to the crowd. Photo by Bert Campbell

The Escambia County Auburn Club held its annual meeting at the Brewton Country Club Thursday, June 19. Auburn’s special teams coach, and Brewton native Scott Fountain was the guest speaker.
Over 200 alumni and friends listened as Coach Fountain discussed spring training, recruiting and expectations for the upcoming season. All coaches are returning and this is the first time head coach Guz Malzahn has had a returning quarterback. Fountain said Auburn has five tough road games but is concentrating on one game at a time – the first is Arkansas.
Former Auburn player and current W.S. Neal coach Jared Cooper delighted the Auburn fans with tales from his time as an Auburn tiger with the 2010 National Championship team.
The Club awarded two scholarships to young men from T. R. Miller High School: Chandler Brown and Lowell Swain. Next year the meeting will be held in Atmore.