For nearly 30 years, Circuit Judge Bradley E. Byrne has donned a robe and presided over countless cases. At the end of this month, that career will be over as he retires from his seat after 27 ½ years. 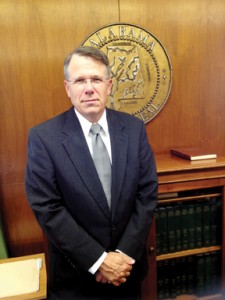 Circuit Judge Bradley E. Byrne poses inside his office. He will retire at the end of the month.

Garrett, Thompson and Hines. After growing up in a political family – his father was Escambia County sheriff for 24 years – Byrne said he never intended to run for office.

During his time on the bench, Byrne has been responsible for all criminal felonies, jury trials, civil cases over $10,000, divorces, custody battles and workmen’s compensation cases.

“This is the highest level court,” he said. “Capital murder cases were always the most stressful. There’s so much at stake.

“But I would have to say, that I enjoy a good jury trial the most – when the attorneys are well prepared,” he said. “I felt then, that’s what being a judge is all about – to make sure all the points of law are covered and to make the best ruling.”

Byrne has also handled all of the county’s drug court cases. It’s a duty he will continue, he said.

“I’ll also handle cases on an as needed basis, so technically, I’m not completely retiring,” he said. “I’m cutting back. I have a great team, and I don’t want to leave the people (in drug court).

“One of my greatest joys is watching people succeed in getting control over addiction and go on to lead productive lives,” he said. “You can’t save everybody, but we can do our part.”

Like most retirees, Byrne said he plans to spend more time with his family and grandchildren.

“I didn’t travel much,” he said. “As a judge, the cases just pile up if you leave. It will be nice to spend time with family.”

The public is invited to a retirement reception on June 30 at 3 p.m. in courtroom No. 1 in the Escambia County Courthouse.