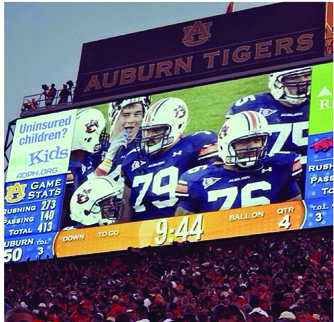 The scoreboard photo of Jared Cooper (No. 79) and Lutzenkirchen (back left with helmet off)
(Photo submitted by Jared Cooper)

The Auburn University family, as well as the Tigers football team, lost a member of their family early Sunday morning when news broke of former football player Philip Lutzenkirchen begin killed in a car accident. While Lutzenkirchen had no ties to the Brewton area directly, in a way he did.
Former Auburn football player and current W.S. Neal assistant coach Jared Cooper played with Lutzenkirchen while at Auburn. The two were teammates during Auburn’s 2010 national championship run.
Cooper said Lutzenkirchen was the type of guy that everyone gravitated toward just by virtue of being a genuinely good person.
“I’ve heard fathers describe guys as ‘the type of guy I’d like for my daughter to bring home’”,” Cooper said. “I’m not a father myself, but I believe he would have absolutely fit the mold. When I got the news (Sunday morning), my mind naturally tried to fight it off for as long as possible, but reality eventually set in. The first thoughts after that were for his family. He had great parents and three sisters, and my heart breaks for them. Auburn fans will describe him as a great ‘Auburn man’, and understandably so, but Philip was a good ‘man’ by a universal standard.”
Cooper said he has a picture of Lutzenkirchen and himself taken while the two were on the video board during an SEC game against Arkansas at Jordan Hare Stadium in Auburn. The picture has always been a funny one to Cooper.
“I have always found this picture funny and posted it not long ago (on Facebook), but a new depth of it struck me today,” Cooper said Sunday. “Phil was a guy who always kept things in perspective, and made those around him want to do the same. In the middle of a meaningful SEC game during a National Championship run, Phil made us all want to play the ‘don’t look at the camera’ game more than we wanted to play the actual game itself. Sports are a great outlet, but things like enjoying life and those around you carry much more weight.”
Cooper went on to say that of those that were fortunate enough to know Philip, a few will be able to pen beautifully worded descriptions of the man that he was.
“Most of us, like myself, will be will be relegated to inadequately trying to describe the impact he had on each of us,” Cooper said. “As roommates in Arizona before the National Championship game, I watched him, more than once, mock his own ‘Lutzie’ (the dance he did after catching a touchdown pass against Alabama during the 2010 season) that people praised him for. Keeping a walk with Christ and being humble are much more relevant parts of life, and he always handled the notoriety that he received extremely gracefully. Phil was also a man of faith, and made sure that the ‘seriousness’ of college football didn’t get in the way of that either. God makes no mistakes in who he crosses your paths with, and I’m thankful that I was able to share just a small part of my path with Philip Lutzenkirchen.”
Lutzenkirchen caught 59 passes for 628 yards and 14 touchdowns in his career. His 14 touchdowns are the most in school history for a tight end, while his seven scores in 2011 set a single-season school record for the position. But it is the pass he caught from Cam Newton in the 2010 Iron Bowl that fans remember the most. It capped a furious rally from 24 points down as the Tigers upended their rivals, the Alabama Crimson Tide.
Lutzenkirchen died in a one-vehicle wreck early Sunday morning outside of LaGrange, Ga. He was 23.
Lutzenkirchen’s fatal accident occurred in Troup County, just southeast of LaGrange, at approximately 3:06 a.m. Sunday. The accident happened at the intersection of Upper Big Springs Road and Lower Big Springs Road. The vehicle was a 2006 Chevy Tahoe and the driver missed a stop sign at the intersection of those two roads (described as a T-Intersection). The Tahoe traveled through the intersection off into a churchyard and was out of control for about 450 feet.
According to police reports, the vehicle overturned, flipping several times and ejecting three of the four passengers—Lutzenkirchen being one and he was killed at the scene.
The driver of the vehicle, Joseph Davis, was also killed. According to the official police report, blood was drawn from Davis “to determine if alcohol impairment was a contributing factor” in the accident.
Lutzenkirchen, who was seated behind Davis, was not wearing his seat belt.
The other person killed in the wreck was Davis, 22.
The two other passengers in the vehicle — Elizabeth Ann Seaton Craig, 22, of Eatonton, Ga., and Christian Tanner Case, 20, of Dadeville, Ala. — were taken to the West Georgia Medical Center in LaGrange. Case, sitting in the front passenger seat, was wearing his seat belt. He was treated and released from the medical center. No update was available on Craig’s condition. She was sitting in the back seat and not wearing her seat belt when she was ejected from the vehicle.