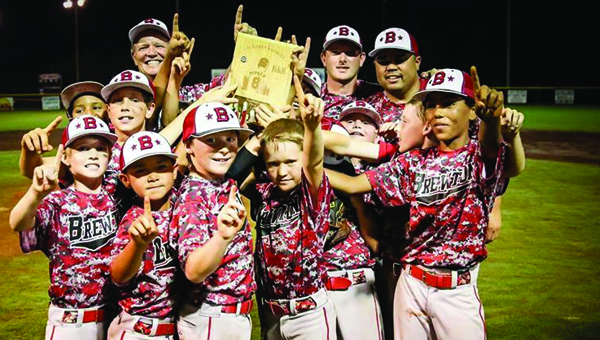 They started with a loss, but they ended with a win — a district championship win.
That is the story of the Brewton 10U Cal Ripken baseball team as they captured the district championship Tuesday night in Opp with a 9-7 win over the Bobcats.
After falling to Opp in the first game of the tournament on Saturday by a score of 10-5, Brewton fell to the loser’s bracket. From there, Brewton won five games in three days.
After falling to Opp in its first game, the Brewton All-Stars fought their way through the bottom bracket, defeating Covington County, East Brewton and Andalusia before topping the Bobcats 12-2 on Monday night in the first championship game.
Games were called Sunday because of the weather and moved subsequently to Monday night, where Brewton defeated Andalusia 6-2 and then Opp in the 10-run victory.
Brewton head coach David Peace said the championship win Tuesday in Opp over Opp was a great win.
“These kids, they are tough,” he said. “They are good kids. They just bonded. They like to play. They like to have fun. That’s what we stressed on the way over here…enthusiasm and having fun.”
As for the five straight wins after losing the first game, Peace said that was big as well. “We were up 5-1 against Opp in the first game going into the fifth inning,” he said. “Opp is a really good team. They are a good hitting team and they just started hitting the ball and they hit the ball in the gaps and came back on us. We didn’t get down and we knew we could beat them. We just played good and I am very proud of all of them. Everyone one of them.”
In the game Monday night, a back-and-forth affair, Brewton led 2-1 after one inning before Opp tied things up in the third inning.
The Brewton all-stars would plate two runs in the fourth inning to take a 4-2 lead only to see Opp get five in the fifth inning to build a 7-4 lead.
Brewton would not be outdone by the Bobcats as, in the bottom of the fifth, Brewton scored five of their own to take a 9-7 an eventually hold on for the two-run win to get the championship.
In the five-run fifth for Brewton, Peyton Rowell led the inning off by getting hit-by-pitch.
Devin Smith and Bracken Pettis all followed with walks while Jaxson Flores drove in runs with a double. Kyle Blevins added a single while Nolan Atkinson followed with an Opp error to give Brewton the lead.
Flores and Blevins pitched in the win with Flores getting the win.
Blevins went four innings and allowed four hits, two runs, one earned, walked two and struck out four.
Flores went the final two innings and allowed one hit, five runs, one earned, walked two and struck out four.
At the plate for Brewton, Flores was 2-for-3 with a double and two RBIs while Blevins was a perfect 4-for-4 with a double and one RBI.
Trent Cooper finished with two RBIs and Ed Dolihite added one RBI. Devin Smith went 1-for-2 with a double and Bracken Pettis was 1-for-1.
The state tournament will be in Rainbow City July 12-15. Both Opp and Brewton will play in the tourney.
(Andalusia Star-News sports editor Andrew Garner contributed to this story)