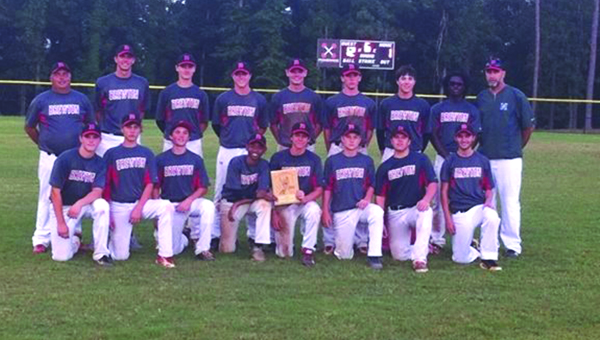 The Brewton Babe Ruth 15-year-old all-star team captured the district championship Sunday with a win over Monroe County. Brewton went 3-0 in the tournament.
Brewton defeated Monroeville 6-2 Friday, Atmore 8-4 on Saturday, and Monroeville again on Sunday by a score of 12-1 in the championship game.
Head coach David Jennings said the tournament was a fun weekend.
“The boys gave a tremendous effort and played with class,” Jennings said. “I am proud of them. Everybody on the team made key contributions in one way or another. Our pitching was outstanding. Our bats were alive and well for most of the weekend also.”
Jennings gave praise to his coaches, crowd and other supporters of the team.
“I want to thank and acknowledge our crowds,” he said. “They were the biggest and loudest and the support is very much appreciated. I want to recognize the other coaches. Howard Joyner does our pitching and we have been coaching together for six years work well together… most of the time. Eli Cook helped us out this year and I coached Eli 17 years ago in the same tournament. It was good to be able to coaching with him this year. I want to thank the City of Brewton for their tremendous support of youth sports. I want to thank Mr. Steve Dickey at the YMCA and for all they do for youth sports. They all do a great job.”
The 15U team will now head to Westside-Mobile for their state tournament games.
“We are looking forward to going to the state tournament,” Jennings said. “I think if we get ourselves in the right mindset, we can go down there and make some noise.”
No stats or game information from Brewton 14s were known as of press time.
Brewton went 1-2 in the tournament and came in third place. Brewton lost to Monroeville in game one before coming away with a win over Evergreen in their second game. Brewton fell to Monroeville in the championship game.
Friday:
Brewton 6, Monroeville 2
Facing off against tourney host Monroeville Friday, Brewton began their tournament with a 6-2 win.
Brewton led 1-0 after one inning and 5-0 after three innings. Brewton would go on and build a 6-0 lead in the top of the fifth inning before Monroeville plated their only two runs in the bottom of the inning.
Jo Jo Booker and Russell Smith pitched in the win with Booker being the pitcher of record.
Booker and Smith combined to go seven innings and allowed five hits, two runs one earned, walked and struck out seven.
Booker went 2-for-4 at the plate with one RBI while Matt Hutchins was 1-for-4 with one RBI and Hunter Brittain was 1-for-2 with one RBI. Jordan Williams went 1-for-3 and Brandon Moye was 1-for-3 with a double and one RBI. Stoke Jennings added two hits and one RBI while Smith was 1-for-3.
Saturday:
Brewton 8, Atmore 4
On Saturday, Brewton rallied to double up Atmore 8-4.
Atmore led Brewton 3-1 after one inning, 4-1 after two innings and 4-2 after three innings. From there, Brewton added four runs in the fifth and two more in the sixth to get the win by four.
Joshua Winton and Lane Clark pitched in the win. The duo combined to go seven innings and allowed five hits, four runs, none earned, walked three and struck out four.
At the plate, Booker had one RBI and Hutchins went 1-for-1. Brittain went 1-for-4 and Drew Williamson was 2-for-3 with two RBIs. Caleb Winton finished with one RBI while Derrick Barton went 2-for-2 with two doubles and two RBIs.
Conner Huskey went 1-for-1 with two RBIs.
Sunday:
Brewton 12, Monroeville 1
In the championship game Sunday, Brewton scored eight runs in the first inning to cruise to a 12-1 win over Monroeville in six innings.
Brewton added four more runs in the sixth inning while Monroeville’s lone run came in the bottom of the inning.
Brittain and Smith pitched in the win and combined to go six innings and allowed one hit, one runs, none earned, walked four and struck out three.
At the plate, Booker went 2-for-4 with a double and two RBIs while Brittain went 2-for-4 with two RBIs.
Williamson went 1-for-2 with one RBI and Joshua Winton had one RBI.
Stokes Jennings went 1-for-2 with a double and one RBI while Russell Smith was 2-for-4 with three RBIs. Barton was 2-for-3 with a double and one RBI.