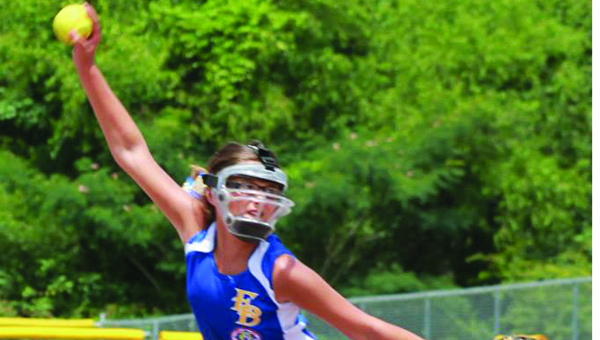 The East Brewton 10U softball all-stars went 3-1 in their tournament games in Andalusia and finished as district runner-up.
East Brewton opened with a 19-3 win over Covington County on Thursday before coming away with an 8-6 win over Tri County on Friday.
On Saturday, in the tournament semifinals, East Brewton once again defeated Covington County 13-4 to advance to the championship game.
In the championship game, East Brewton lost to Brewton 16-2.
East Brewton 19, CC 3
East Brewton scored six runs in the first inning, seven in the second and six more in the third inning to cruise to a 19-3 win over Covington County Thursday in their tournament opener.
Ashli Wyatt and Madison White pitched in the win.
Wyatt struck out five, allowed one hit, walked five and gave up three runs. White came in relief and struck out two and walked one while allowing no runs.
At the plate for East Brewton, Kendall Carpenter got a single and Bri Moye had two singles. Harley Wilson added a single while Madison Hawthorne had a double. Natalie Wyatt finished with two singles and Kaylee Hunter had two singles.
East Brewton 8,
Tri County 6
In their second game, East Brewton held off Tri County 8-6.
Tri County led 3-1 after one inning and 4-1 after two innings. In the third inning, East Brewton cut Tri County’s lead to 4-3 and then took a 5-4 lead in the fourth.
Still leading 5-4 after the fifth inning, East Brewton went on to get the win by a score of 8-6 in the sixth inning.
Madison White pitched two innings and struck out three while allowing four hits, walked two and allowed four runs. Ashli Wyatt went four innings and struck out five while allowing three hits, two walks and two runs.
At the plate for East Brewton, Kaylee Hunter had two singles and scored twice while White had two singles and scored one. Teresa Harris had a single and a triple and scored one, Jaylin Bondurant had a single (scored once), Kendall Carpenter had a single (scored once,) Madison Hawthorne had a single, and Gracie Sims had a single.
Harley Wilson walked and scored while Sydney Aaron walked and scored.
EB 13, CC 4
In the semifinal game Saturday, East Brewton defeated Covington County 13-4.
Down 1-0 after one inning, East Brewton scored four runs in the second inning to take a 4-1 lead. With their lead cut to 4-3 in the third, East Brewton added three in the inning and six more in the fifth while holding CC to one final run in the fourth inning.
Wyatt, White, Carpenter, Hawthorne, N. Wyatt and Wilson all had hits. A. Wyatt had two RBIs, T. Harris had one along with N. Wyatt while Hawthorne had vive RBIs. Hawthorne had a double and a triple in the loss.
A. Wyatt and White both pitched in the win and combined to go six innings, four hits, four runs, three earned, walked one and struck out nine.
Brewton 16, EB 2
In the championship game against Brewton, East Brewton lost 16-2.
East Brewton led 2-0 after one inning before allowing Brewton to score one in the second, six in the third, and nine in the fourth.
A. Wyatt, White and Carpenter all had hits with Carpenter having both RBIs.
A. Wyatt and White pitched in the loss and allowed 15 hits in four innings, 16 earned runs, walked eight and struck out six.