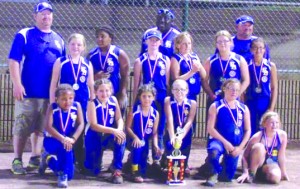 After finishing second at sub-regionals, the East Brewton 10U all-star softball team advanced to the state tournament and finished as state runner-up Saturday.
Overall, East Brewton went 4-1 in the tournament before falling in the state championship game to Alex City.
East Brewton went 3-0 in their pool play games as they came away with a 7-6 win over Alex City in extra innings for their first tournament win. In game two, East Brewton took down Brewton 16-3 and then defeated Sylacauga 17-7.
In the single elimination rounds, East Brewton edged Sylacauga 11-10 before falling to Alex City in the title game by a score of 19-3.
“I was lucky to have such an awesome group of girls to work with,” East Brewton head coach Jason Wyatt said. “They are talented ball players and outstanding young ladies. I could not have asked for a better group of parents as well. Going to state was a wonderful experience for all of us, but it never could have happened without the outpouring of support from our community. The people of East Brewton and Brewton were eager to help our girls, and it meant so much to all of us. For that, I would like to say thank you. Thank you for giving these little girls this awesome opportunity to represent you.”
EB 7, Alex City 6
After trailing 6-0 after one inning of play, East Brewton rallied to down host Alex City 7-6 in eight innings Friday night.
Down 6-0 after the top of the fourth inning, EB scored seven unanswered runs to get the win. East Brewton scored two in the fourth and four in the sixth inning to tie the game and force extra innings. After both teams failed to score in the seventh inning, East Brewton scored the winning run in the eighth inning to get the win.
Jaylen Bondurant and Madison White pitched in the win with White being the pitcher of record.
The duo combined to pitch eight innings and allowed 11 hits, six earned runs, walked eight, struck out five and hit one batter.
At the plate, Ashli Wyatt, White, Teresa Harris and Bondurant all had hits with White having one RBI.
EB 16, Brewton 3
East Brewton used a 10-run second inning to rout Brewton 16-3.
East Brewton led 3-1 after one inning and 13-2 after two innings. East Brewton increased their lead to 15-2 in the third inning and 16-2 in the fourth before Brewton added the final run of the game in the bottom of the fifth inning.
Ashli Wyatt earned the pitching win for East Brewton while Makenzie Thomas and Courtland Salter pitched in the loss for Brewton.
For East Brewton, Wyatt went four innings and allowed two hits, three runs, two earned, walked five and struck out nine.
For Brewton, Thomas and Salter combined to go four innings and allowed nine hits, 16 runs, nine earned, walked seven and struck out nine while hitting two batters.
At the plate for East Brewton, Ashli Wyatt, Madison White, Kendal Carpenter, Natalie Wyatt, Harley Wilson and Jaylen Bondurant all had hits. Carpenter had a homerun in the win.
White, Carpenter, Natalie Wyatt, Kali Hunter, Wilson and Bondurant all had an RBI in the win.
For Brewton, Abby Terrell and Macie Happoldt had one hit each. Chloe Smith and Jennings Ruzic had one RBI each.
EB 17, Sylacauga 7
In their last game of pool play, East Brewton cruised to a 17-7 win over Sylacauga in four innings.
East Brewton led 1-0 after one inning, 5-0 after two, 10-3 after three innings and outscored Sylacauga 7-4 in the final inning to get the win by 10.
Ashli Wyatt, Madison White, Carpenter, Natalie Wyatt, Hunter, Harris, Bondurant and Gracie Sims all had hits in the win. Carpenter, Harris, Bondurant, Sydney Aaron, and Sims all had RBIs.
Madison White and Ashli Wyatt combined to pitch in the win and allowed seven hits, seven earned runs, walked two and struck out three in four innings.
EB 11, Sylacauga 10
In their second game with Sylacauga, and first of the single elimination part of the tournament, EB defeated Sylacauga 11-10 to move to the championship game.
EB built an 11-4 lead through the fifth inning and held on for the one-run win after Sylacauga scored six in the sixth inning.
East Brewton led 4-0 after one inning, 6-0 after two innings, and 8-0 after four innings.
In the win, Ashli Wyatt and Madison White teamed up for another pitching win as the duo went six innings and allowed 10 hits, 10 runs, nine earned, walked six and struck out 13.
At the plate, Ashli Wyatt, White, Natalie Wyatt, Carpenter, Hunter, and Harris all had hits. Natalie Wyatt had two RBIs while Carpenter, Hunter, Harris and Sims all had one each in the win.
Alex City 19, EB 3 (Championship game)
In the state championship game, East Brewton suffered a 19-3 loss to host Alex City.
Alex City led East Brewton 7-2 after one inning and 9-2 after four before scoring 10 runs in the fifth inning to break the game open with a 19-2 lead. East Brewton added one in the fifth, but took the loss by 16 runs.
White and Ashli Wyatt pitched in the loss with White being the pitcher of record.
The duo went five innings and allowed 16 hits, 19 runs, 17 earned, walked eight and struck out five.
At the plate, Ashli Wyatt went 2-for-2, White went 1-for-2 and Madison Hawthorne went 1-for-2 with a double.