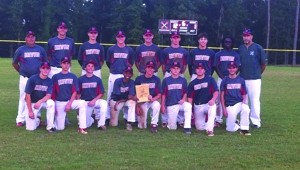 Brewton’s 15-year-old Babe Ruth team will begin play in the state tournament Saturday, July 12. The tournament will be played at Daphne High School.
Brewton will be one of nine teams in the tournament. The nine teams will be divided into three pools of three teams each.
Brewton will be in the Central pool along with Opp and Sylacauga. Matthews, Childersburg and Wetumpka will be in the American pool while Westside, Tallassee, and Monroe County will be in the National pool.
Games will begin Saturday at 9:30 a.m. and will be played at 11:30 a.m., 1:30, 3:30, 5:30, and 7:30 p.m.
The 9:30 a.m. game will see Matthews and Childersburg play followed by Westside and Tallassee at 11:30 a.m. and Opp and Sylacauga at 1:30 p.m.
At 3:30 p.m. Matthews and Wetumpka will play followed by Westside and Monroe County and then Opp and Brewton at 7:30 p.m.
On Sunday, games will be played at 9 and 11 a.m. as well as 1 p.m.
At 9 a.m., Sylacauga and Brewton will meet followed by Childersburg and Wetumpka at 11 a.m. and Tallassee and Monroe County at 1 p.m.
On Monday at 9 a.m., seeds five and six will play followed by seeds three and four at 11 a.m. At 1 p.m., the No. 1 seed will play the five/six winner followed by the No. 2 seed playing the three/four winner.
At 10 a.m. on Tuesday, the championship game will be played.
There will be no admission to the tournament.