According to a blog on the Hattiesburg American’s Website (http://blogs.hattiesburgamerican.com/theplacetobe/2014/07/20/prep-offensive-lineman-commits-to-usm/) T.R. Miller’s James Peach has verbally committed to play football at the University of Southern Mississippi. Peach, 6-foot-6, 280-pounds, is a rising senior offensive lineman for the Tigers. 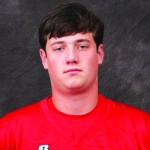 According to the blog Peach, who also holds offers from Western Kentucky, Arkansas State, Troy and Samford, said he chose Southern Miss after a visit to Hattiesburg this weekend.
“Once I got there, I just realized how tight-knit all the coaches and players are,” he told the Hattiesburg American. “It felt like home. I really enjoyed my visit. Everything worked out perfect for me.”
T.R. Miller went 12-1 last season before losing in the AHSAA class 3A state quarterfinals to state runner-up Leeds.
Peach was selected as a first-team all-state selection in Class 3A as a junior after the 2013 season.

The Brewton Standard will have more on this, along with more comments from Peach, in Wednesday’s paper.