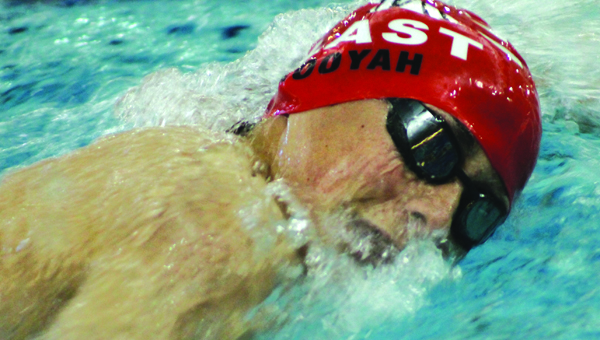 The Brewton Local Area Swim Team Tigersharks are blowing up the blocks this summer, and bringing home the hardware.
The Tigersharks have hosted two home meets, one of which was the mid-season Junior
Championships, with over 130 swimmers from Bay Minette, Daphne, Fairhope, Gulf Shores, Atmore and Brewton’s Tigershark swimmers. The team has also traveled to Fairhope, Bay Minette, and Daphne this summer as a part of the Gulf Coast Area Aquatic League.
Team Tigershark, listed below, has brought home a plethora of both ribbons and medals in their respective age groups in each of the meets they have participated in.
Team swimmers who have competed in the events this summer have been: Nolan Atkinson, Mac Baxter, Ashlyn Blake, Logan Blake, Kinsley Byrd, Jocelyn Carpenter, Damien DeRidder, James DeRidder, Peyton Golden, Aurora Gibson, Liam Gibson, Addison Heath, Anderson Heath, Emerson Heath, Cole Jernigan, Callie Kent, Caleb Kent, Mathew Kirkland, Kayleigh Kulichka, Colby Morris, Patrick Noble, Carli Peach, Sara Scott, Collin Walton, Kylee Walton and Harrison Walton.
Several Brewton swimmers have set Junior Championship records this season.
These swimmers broke meet time standards in their respective age groups and events during the June 28th GCAAL Junior Championships:
Mac Baxter – son of Chris and Angel Baxter; Matthew Kirkland – son of Jeff and Heather Kirkland; Caleb Kent – son of Danny and Phyllis Kent; Carli Peach – Daughter of Chip and Ann Peach; Jocelyn Carpenter – Daughter of Brent and Carla Carpenter; Sara Scott – Daughter of Doug and Sheila Scott; and Kylee Walton – Daughter of Mark and Heather Walton.
The Tigersharks have had a very successful summer season so far, with GCAAL Championships just around the corner, July 25 and 26 in Gulf Shores. Nine teams will be
participating in a summer blowout that will crown champions once again.
Coach Angel Boyd stated that she is very excited about Summer Championships, and is ready to see her team shine. Coach Boyd is dedicating this meet to her late father, who passed away earlier this summer, the day before Junior Championships.
“I would also like to once again, thank all the parents who volunteered and helped so much during her absence and during her families time of need,” Boyd said.
Fall registration will begin July 27. For more information check out:
www.tigerswimming.jimdo.com or like the Brewton Local Area Swim Team Facebook page.
The Tigersharks are coached by Angel Boyd. Boyd is assisted by Brandee Morris and Brooke Glass.