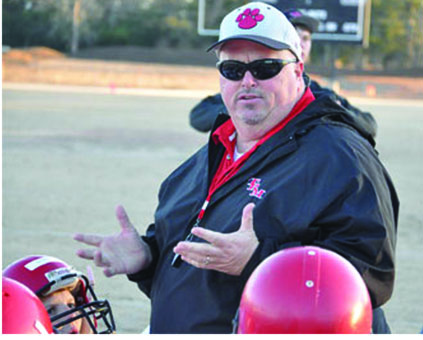 Brewton Middle School teacher and coach Gerald McAnally is trading in his whistle for an administration job at Excel High School. McAnally, who has been in Brewton for eight years, was recently approved to be the new assistant principal at Excel.
While in Brewton, McAnally has mainly served as head coach of the BMS football team along with being the head coach of the boy’s basketball team at BMS. He also has been an assistant coach for the T.R. Miller track teams along with other duties at the schools.
While in those capacities, McAnally said the favorite part of the job was being able to work with the seventh and eighth graders as they begin their journey playing for T.R. Miller.
“I have always believed that these years are so very important developing them into fundamentally sound football players and also helping them understand what work goes into being a student athlete at T.R. Miller,” McAnally said. “The practice field is not only important, but also knowing how important getting your schoolwork done and behaving in an appropriate manner in the classroom was always one of my focal points as well.”
While he is getting ready for his new adventure in Excel, McAnally said he has many fond memories of his time at TRM and BMS.
“My second year here we were literally inches away from playing in the state championship game for football,” McAnally said. We won four state championships in track and had two undefeated BMS football teams. But probably my most cherished memory is being able to watch and help coach from the sidelines my son on Friday nights. It is no small thing to watch all the kids you’ve coached over the years, and it is really special to watch your son wear that jersey with only one name on the back T.R. Miller and play like a champion. One game stands out so vividly was the champions challenge we won 27-7 against the defending state champs Leeds. Caleb was a starter in that game and really had a great game.”
McAnally said the hardest thing about leaving would be not being on the sidelines every Friday night to congratulate his former players on a good play or effort, and mostly to encourage them when it doesn’t go as well as hoped.
“All the kids I have coached over the years are special, but this years seniors, my last undefeated middle school team, have such a chemistry and a will to win,” he said. “They will have great year and I wish them all the best with their senior season.”
McAnally said another thing he will miss most about coaching is the ability to help kids with things that are not easy, and encourage them to do their best regardless of their ability or inability.
“Coaching middle school football has been such a rewarding opportunity for me,” he said. “Seventh and Eight grade students are still searching to find who they are and what path they are going to take. They will soak up every bit of knowledge you choose to impart in them.”
McAnally said he is really excited about becoming an administrator at Excel.
“It is a great place to start my new journey,” he said. “Their community is very similar to Brewton in that on Friday nights everyone is at the game if they are home. Their sense of pride and support for the school, in every aspect is awesome. I have been teaching only nine years, but administration has always been my long-term goal. I really excited that the opportunity presented itself when t did. I believe that we need people who have a desire too help students be successful in life and this is a grand opportunity to do just that.”
McAnally offered thanks to the people that have helped him during his tenure in Brewton.
“I would like to thank Coach (Jamie) Riggs, Mr. (Lynn) Smith, and my current principal Carrie Brown, and the entire staff at BMS and most of all the entire community of Brewton for making (my wife) Sharon, (my son) Caleb and myself feel like we are part of the community from day one,” McAnally said. “It was an awesome experience that I will never forget to have been part of such a great community of supporters in every thing we implemented. We have made some great friendships along the way that we always cherish those relationships we have made. I desire your prayers as we embark upon a new journey and establish new relationships not to replace those at T.R. Miller, but to add those to some of our greatest memories we will cherish forever. I pray as I first stated when we came here that when it comes my time to go that it truly mattered that I lived and hopefully made a difference in a young man or woman’s life and helped them be successful.”
McAnally led Brewton Middle School’s football team to back-to-back undefeated seasons in 2009 and 2010.
As for a replacement for McAnally as head football coach at BMS, T.R. Miller athletic director Jamie Riggs said he and his staff would “just absorb the duties and go on.”