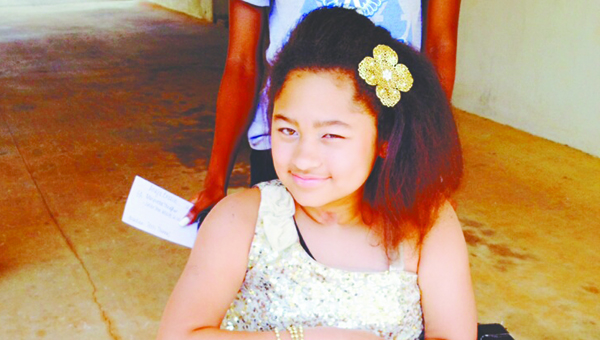 One year. And every minute of those 365 days Terri Thomas thanks the good Lord above that she didn’t listen to doctor’s advice to let her daughter go – to let her slip away after being thrown from the back of a pickup truck.
The accident had claimed the life of Thomas’ cousin’s son.
“And by God, I wasn’t going to let it take my daughter’s.”
Looking at the small bundle in the hospital bed, the bruised and battered body of Anasia Brazile was a far cry from the now-sparkling girl wearing a pageant crown. Sure, she’s in a wheelchair, but it’s only a matter of time before she glides across the stage without any help, Thomas said of her daughter.
Both the driver and his adult passenger have pleaded guilty to charges stemming from the crash, but Thomas said she doesn’t focus on that part of the incident.
“I’m all about getting Anasia well and home,” she said.
For the last year, Brazile has moved from Sacred Heart Hosptial to a Montgomery rehabilitation unit. Now, plans are under way to move her to Mobile.
“We’ve had our ups and downs, and it’s been a hard year,” Thomas said. “Anasia has done a total circle from what doctors first said. I can’t wait to show her off.”
Brazile has progressed from being a coma with a trach and a feeding tube to walking some on her own and eating “anything she wants.”
“She’s walking and talking now; her vocal chords are a little weak, but she can whisper words,” Thomas said. “She can say ‘Mom,’ and it sounds so sweet. There’s nothing in her way to making a full recovery. Sure, it’s going to take some time, but I know 1,000 percent we’re going to get there.”
The family’s insurance plan allows for one visit home per month. On a recent trip out, Brazile competed in a beauty pageant in Prattville.
“It was amazing to see her,” Thomas said. “Three months ago she got to take her first trip home. When she reached out to change the radio station, she would shake so much. Now, it’s done with a flip, no hesitation; no shake. She knows what she wants to listen to and makes sure it happens.”
Immediately following the wreck, doctors gave Brazile a less than 10 percent chance of recovery.
“I knew that was not true,” Thomas said. “People are amazed by her. I knew from the day of the wreck that we’d be good. I knew in my heart she was going to be fine. People from church put up a sign that said, ‘Don’t come into this room if you have something negative to say.’ I lived by that every single day.
“A lot of people wanted to let her go. I had to fight for her,” Thomas said. “I was the only one to stand up for her. I said, ‘I’m not giving in.’ I meant it then, and I mean it now. We’ve got a lot of hard work ahead of us, but we’re going to make it.”
Thomas credits her church family at Divine Temple and her friend Lacie McCall with giving her the support to face each day.
“They both showed me to fight for Anasia, to not give up and to have hope and faith,” she said. “I can’t thank them enough.
“Sitting by Anasia’s bed, I told her that it was going to be OK, that she was going to be so famous after this,” Thomas said. “I knew she’d be alright. I could see into the future. I said, ‘Girl, you are going to be a movie star. You are going to be so popular. You’re a miracle.’
“And look at things now. She really is a miracle.”