‘It was a shark’: Hayes takes 37 stiches to repair damage 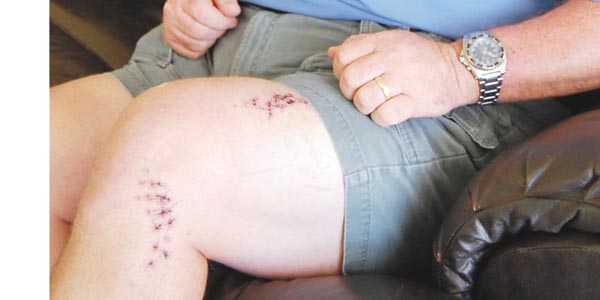 From the bite mark, doctors believe it was an eight-foot bull shark.

Brewton resident Kyle Hayes experienced “Shark Week” firsthand a week ago after being bitten by what was believed to be an 8-foot bull shark near Port St. Joe, Fla.
On Monday, Hayes, who owns Special Touch Restoration, showed off the 37 stitches where the animal’s enormous teeth captured his left knee between its jaws.
Hayes said he and his family were vacationing in Indian Pass when the attack happened – a longstanding family tradition where the group, which also included his wife, LaCresha, the couple’s two children and their friend and Hayes’ cousin and his family.
The previous day, everyone enjoyed a fun-filled day of sand, surf and fishing, he said.
“The next morning, the kids were still asleep, and LaCresha said she wanted to lay out on the beach,” Hayes said. “I don’t care for it, but I went with her. It was about 11 or so, and it was hot. I remember thinking, ‘I’ll wade out and cool off.’”
For about 10 minutes, Hayes said he enjoyed the coolness of the waist-deep water.
“I never saw the shark,” he said. “I was just standing there, and I felt something hit my left knee. It nearly took my feet out from underneath me. There was a shake, and then I felt its tail hit me, and I knew what had happened.”
Hayes didn’t panic, he said. He calmly made his way out of the water, toward his wife, he said.

“It didn’t even hurt, and there was no blood,” he said. “But by the time I made it to LaCresha, blood was running everywhere.”
The couple and Hayes’ cousin’s husband, Toggy Pace of Milton, Fla., made their way to Sacred Heart Hospital, where doctors said it was the first shark bite they’d seen in the local emergency room. Doctors were able to somewhat identify the animal based on its bite size, Hayes said.
“They said they see an average of four stingray stings a day during the summer, though,” Hayes said. “They knew it wasn’t a black tail shark, because they only get between four to five feet. Bull sharks are common in the area and very aggressive, so that’s what they think it was that bit me.”
Hayes said he considers himself very lucky – but not for the reason one might think.
“It won’t keep me out of the water or from going back to the beach,” he said. “I wouldn’t hesitate to get into clear water like you see around Pensacola or Destin. Murky water, like was out that day, sure.
“The thing about sharks is that they’re just looking for bait fish,” he said. “I’ve fished there for 15 years, so I knew they were in the water. That day, he just thought I was a baitfish. That’s all.
“Just the day before, we were all in that same water,” he said. “If it would’ve been one of the children, things would’ve ended badly.
“But, the funniest thing was the kids were still asleep when it happened,” he said. “So when they woke up, my cousin, Kelly, told them we’d gone to town. Brody, my son, asked, ‘Oh good. Is Shark Week on?’”