TRM volleyball to be young 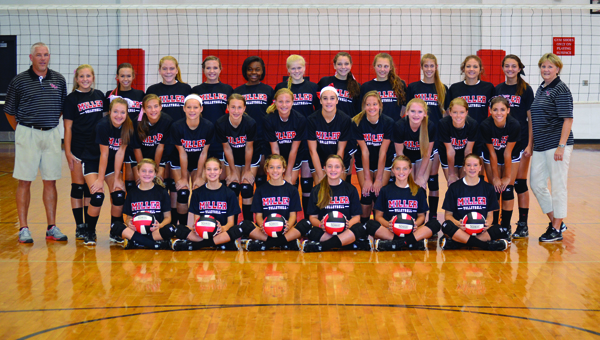 T.R. Miller’s Lady Tiger volleyball team will begin their season next week with a road game at Flomaton.
The 2014 team shows eight varsity players, with only one being a senior.
“Varsity-wise, we had a great summer,” Lady Tiger head coach Greg White said. “We lost seven seniors off of last year’s team. We had a good team last year, so we are going to have to replace a lot of folks. We have three people on this year’s team that saw varsity action consistently last year as backups. We have a lot of holes to fill, but we have a lot of people that have really stepped up and that have done a good job. We are still working on some things, but that will come with time. As far as how they are working and how we are doing things right now, I am very pleased.”
White said his lone senior is Brittany Warren.
“We have eight on varsity right now with only one being a senior,” White said. “Our lone senior is Brittany Warren. She is an outside hitter for us. She mostly played back row for us last year and setter. She is doing a great job and probably will play all the way around this year for us. She is a real consistent player and gets after it really hard for us.”
The Lady Tigers will have three juniors on the team.
“One junior is Amelia Peach,” White said. “She started last year for us as an outside hitter. She did a great job. We look for her to continue to improve and to build on what she did last year. Makayla Harrison is another junior. She started out on JV last year and we moved her up towards the end of the season. She will be a middle hitter for us this year and a blocker. We are expecting good things out of her. Lizzy Pollitte is another junior. She played JV last year and probably was one of our most consistent players last year on JV. She plays some outside and some back row. She is a real consistent server and we will use her a lot in that role.”
There will be four sophomores on the 2014 squad for T.R. Miller.
“We will have four sophomores,” White said. “One will be Taylor Austin. She will play in the middle and this is her first year on varsity. She is a good athlete. She plays hard and gets after it. Madison Douglas is just an athlete. We have her playing libero. She gets on the floor and dives for balls and sacrifices her body. Both our setters this year will be sophomores in Caitlyn Smith and Grace Ruzic. Caitlyn moved up at the end of last year and spent some time with us. Her and Grace have really battled all summer and they have come along really good.”
As for the schedule, T.R. Miller moves out a volleyball area with Bayside Academy, Cottage Hill, and W.S. Neal.
“Our schedule this year shows Opp and Hillcrest in our area,” White said. “Hillcrest is a second-year team and we have never played them before. They are improved from last year. We have not played Opp in a couple of years. We are only playing Opp once this year due to a scheduling conflict. You are only required to play once. But we will have to see how the area shapes up for us. We would love to host the area tournament.
We have added a tournament in Straughn and the county tournament is at JDCC again. Our middle school and JV team will play in one at Bayside Academy. We have a few tournaments and a few tri-matches this year, so we will get to see what tournament-like atmosphere will be like.”