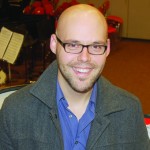 A former T.R. Miller High School band director was arrested Wednesday for allegedly having an inappropriate sexual relationship with a student.

Ganious, 32, was a six-year employee of the Brewton City School System. He left in June to take a position at Thomas County Central High School in Georgia.

“Right now, we are in the preliminary stages of the investigation,” McGougin said. “Mr. Gainous is charged with a class B felony at this point and is being brought back to Alabama to allow investigators to fully move forward with the case.”

McGougin said additional charges are forthcoming; however, he declined to comment on the specifics of the case as it remains under investigation.