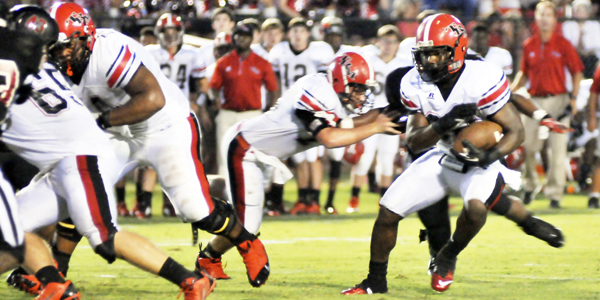 It was a win for TRM Friday night.

T.R. Miller outscored Andalusia 21-0 in the second half and ran to a 38-15 victory in Municipal Stadium at AHS Friday night.

From the start, the Tigers dominated the line of scrimmage on both sides of the ball, which proved to be the difference in the game.

“They were physical,” Seymore said. “They took the game to us. They controlled the front, especially in the second half.

“I’ve got to give it to (TRM) coach (Jamie Riggs), they had a great game plan and they carried it out,” he said. “Their kids played hard from start to finish.”

Last night was the first season-opening defeat for AHS since 2008, when the Bulldogs lost 50-26 to Straughn.

Riggs said his team’s biggest strength are the “guys up front.”

“We have more experience right there,” Riggs said. “We have a good group of senior linemen. We really wanted to depend on them tonight.”

TRM led 17-15 at halftime and capped a 70-yard drive with a 21-yard touchdown rush from junior running back Ahmaud Taylor with 7:39 left in the third quarter. The extra point by Hunter Brittan was good to put the Tigers ahead 24-15.

Touting a no-huddle and fast-paced offense, the Bulldogs couldn’t get anything going on their next offensive series.

TRM answered with a short-scoring drive from the Andalusia 39-yard line, where junior running back Tamerick Jenkins ran it in from the 1. With the PAT, the Tigers led 31-15 with 2:59 left in the third quarter.

Senior Jones Manning, who made his first start for the Tigers, connected with junior running back Markail Mitchell for a 44-yard strike with 11:49 in the fourth.

“I’m real proud of him,” the long-time Tigers coach said. “I thought he handled himself really well.”

Manning finished the game going 9-of-12 for 204 yards and a touchdown for the night. Jenkins had two receptions for 56 yards.