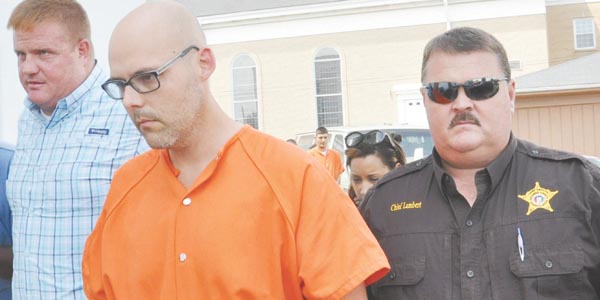 Victims: We didn’t want it to happen to anyone else

Jeffrey Lance Gainous, 32, faces a total of 12 consolidated charges, including being a school employee having sexual contact with a student under 19; ethics violations since the school property was used during the alleged crimes; sexual abuse and unlawful imprisonment.

Gainous, or “Mr. G.” as he was known to students, is accused of having sexting conversations with at least six victims, as well as well as tying up at least two teenagers and gagging them, using ropes and other bondage devices during sex. Incidents reportedly occurred inside the school band room, and at Gainous’ former home in Brewton.

In court Monday, District Judge Jeff White read affidavits alleging Gainous allegedly slapped and kissed “Jane Doe” during majorette tryouts in 2012; tied her wrists in the band room while attempting to kiss her, and left notes in her purse and locker; restrained another “Jane Doe” in May 2014 using ropes, and subjected her to “sexual contact by forcible compulsion” in June 2014.

The women, now in their 20s, had a simple message when asked why they waited so long to contact police.

“They said they didn’t want what happened to them to happen to some other girl,” said Sgt. Patrick Caylor, lead investigator on the case. “It takes courage to come forward the way they did – true courage.”

The public became aware of the initial charges against Gainous when he was arrested on Wed., Aug. 20.

The full extent of those involved may never be known, the chief said. Gainous’ alleged victims range in age from 14 to now 20.

Sgt. Caylor described the scenario as a “con,” and said Gainous allegedly began the inappropriate relationships by telling girls he knew someone in the modeling industry.

“These victims realized he was pulling this stunt on everyone,” Caylor said. “They thought (initially) they were the only ones. When (the young women) began talking, they realized, ‘Well, that’s the same story he told me.’

“When the oldest victims came forward, they told us, ‘We fell victim, and we don’t want anyone else to become one, too,’ ” he said. “By coming forward, now everyone in the whole community knows what’s happened, and for them to sit there and tell us, it takes tremendous courage.”

The former band director was given leave to travel to his parents’ home in Cairo, Ga., to await trial once making bond, and was instructed to have no contact with his victims or other minors other than his own children.

As of press time Tuesday, Gainous had not posted bail, and was still being held in the Escambia County Jail.

In June, Gainous left TRM after six years at the band’s helm to head the band program at Central High School in Thomas County, Ga.  He was terminated from the Georgia system upon his arrest last week.