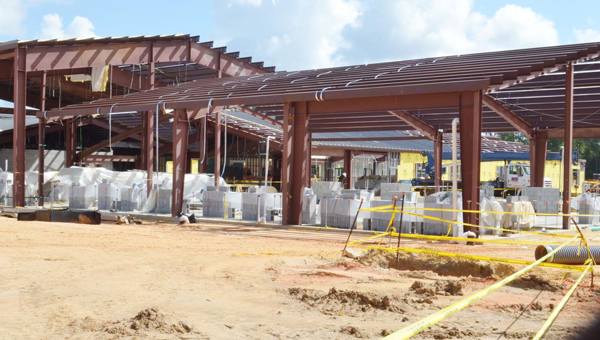 A construction worker is in a medically-induced coma after falling from the roof of the W.S. Neal construction site Monday.
The accident occurred at approximately 9:30 a.m. as the worker was installing roofing panels. The victim, who was not identified, fell approximately 30 feet and suffered multiple broken bones.
The man was transported to D.W. McMillan Hospital and later air-lifted to a Pensacola, Fla., hospital for treatment.
David Ivy with Rod Cook Construction, the company in charge of the project, said the man worked for a subcontractor on the project.
“The owner of the subcontracting company said the worker has a broken shoulder, leg, foot, ribs and arm, and he’s got a punctured lung,” Ivy said. “But the doctors, thankfully, believe he should have a full recovery. They did an MRI and a Cat Scam and his head and neck were OK.”
Superintended John Knott said Tuesday that the school system is “praying (the worker) makes it through and is going to be alright.”