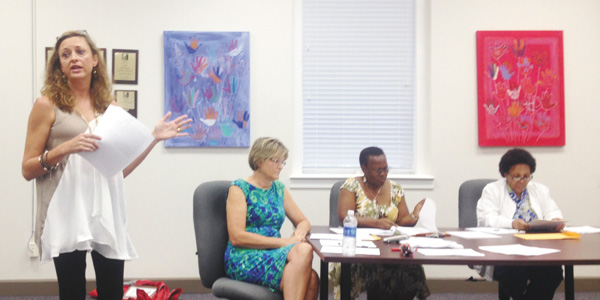 Stephanie Nelson | Brewton Standard
Leza Nelson addresses the Brewton City School Board Monday as a member of the ‘Citizens for a Better Brewton.’

In the wake of allegations that parents are fearful of reporting incidents to teachers and administrators, the Brewton City School Board Monday took the first step in opening a dialogue with the community.

A four-part questionnaire was distributed to a crowd attending the board meeting in support of a “Citizens for a Better Brewton” group.

Last week, Leza Nelson spoke to the Brewton City Council and urged parents to help her “break down this culture of fear.” And the community took her plea to heart as Nelson spoke again Monday to the school board as the unofficial head of the group before a standing-room-only crowd.

Nelson, who was given five minutes to speak, said the group has four core issues to address  – transparency, accountability, policy and communication. 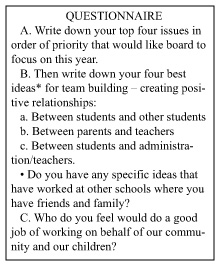 Nelson said she has been inundated with stories of “what people have been through” and that she’d distributed copies to board members.

“I’m not on a witch-hunt; I’m not out for anyone’s job; I’m just here to get answers so we can better advocate for our students and better our school system,” Nelson said after asking about the board’s policy for reporting incidents.

“Parents have said they’ve been to the administration with an allegation or complaint and were told, ‘We’ll handle it,’” she said. “What does that even mean? When you do handle it, do you document it? Do you follow up or do you forget about it?”

In terms of accountability, Board Chairman Stephanie Walker outlined the “chain of command” and said the first step is to take complaints to a teacher. If no satisfaction is achieved, she said, the complaint should then be made to an administrator. The next step would be to discuss the matter with the school board, Walker said.

“But who holds your feet to the fire when (the board) breaks the rules or better yet, breaks the law?” Nelson said. “You say you’ve done nothing wrong and that you have nothing to hide – prove it. Show the citizens of Brewton that our children are our most important assets and show us that academics – not athletics – is No. 1.”

Nelson said the group is “determined to see change that is far reaching. The question now is will you work with us?”

Celina Miller, a former Brewton resident, told the crowd the system violated her autistic son’s civil rights by denying him an individualized education plan (IEP) four years ago. The family now lives in Birmingham, and Miller works as an education advocate.

“I have forgiven what happened to (her son), but I can’t say I have forgotten,” Miller said. “I truly believe the teachers could have and would have upheld the law if they hadn’t felt handcuffed by the administration.

“There is a clear pattern of mistrust and neglect that has been acted on the students and parents of Brewton,” she said. “There is a clear environment of fear in regard to the Brewton City School System and its administration. It’s palpable.

“Personally, I’ve been told parents don’t want to speak up because of what might happen,” she said. “They are afraid they may lose their job or be shunned by the community.

“I understand that fear; I’ve been there,” she said. “I have been like Rosa Parks on the back of that bus when my son’s civil rights were violated. But I’m not afraid anymore and no one should be.

“Change happens from the top down, and I believe that’s what needed now,” she said.

Walker said information gathered from the evening will be used to formulate a response plan to allow for better communication between parents, students and teachers.

“Think of it like gathering information for a strategic plan,” Walker said. “Are we a perfect system? We are not, but all of us who sit at the table are here because we want to do right by the children. We are here because it’s the right thing to do.

“Mutual respect is the way to make progress,” she said. “We are the hearing board of the last resort, and we can’t offer a quick fix today.”

The board’s questionnaire asks those concerned to list their four top issues in the system; four best team building ideas involving students, parents, teachers and administrators, as well as a committee leader to work on behalf of the community and students.

Superintendent Lynn Smith said Tuesday that the public is encouraged to answer the questionnaire. Responses should be submitted to the city board of education office on Bellevue Avenue.