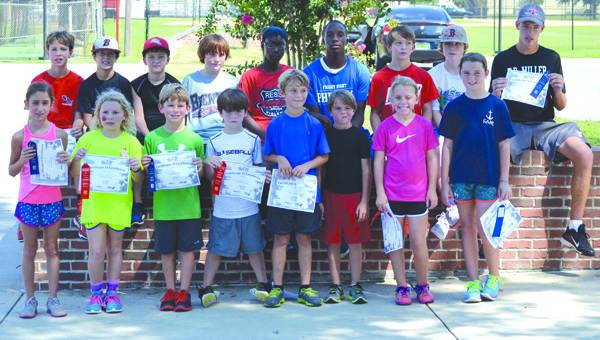 A total of 21 kids participated in Brewton’s annual Punt, Pass, and Kick event Saturday morning on the T.R. Miller practice field.
The event saw five different age groups ranging from ages 6-15 for both boys and girls.
NFL Punt, Pass, and Kick is a national skills competition for boys and girls between the ages of 6 and 15 with boys and girls competing separately against their peers.
Competitions begin on the local level with first place winners advancing to district in Pensacola, Fla., with the winners advancing to a competition at the Louisiana Superdome with the New Orleans Saints.
Each participant is allowed one punt, one pass and one placekick as part of his or her competition.
Scores are based on both distance and accuracy.
A participant’s final score is his or her cumulative total for the three individual events. For example, if the participant scores 40 for punting, 60 for passing and 22 for kicking, the participant’s final score would be 122.
Locally Saturday, in boys 6-7 competition, John Moore took first place followed by Riley Thomas and James Feeley.
In the 8-9 girls group, Kinsley Byrd took first place and Addison Heath took second.
In boys 8-9 group, Sam Kelley was the lone participant and took first place.
In the girls 10-11 division, Makenzie Thomas took first place and Rebecca Ann Moore took second place.
In the 10-11 boys division, Darius Webb took first place, Nolan Atkinson took second and Earl Dolihite took third place.
In the 12-13 boys age group, Logan Bush was the lone competitor and took first place.
In the 14-15 boys age group, Hayden Atkinson took first and Jacobey Hawthorne took second place.
The next round of competition for the local Brewton winners will be at the fields in Pensacola on Nine Mile Road. No date or time was known for the event as of press time.