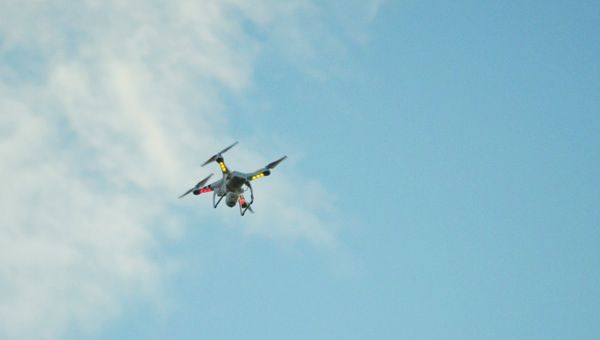 “What is that?” was heard echoing through the stadium Friday as football fans saw something different in the sky – a drone.
While commonplace on the battlefield, the borrowed equipment is being used at T.R. Miller thanks to the donation of a local businessman.
Tiger Head Coach Jamie Riggs said the team wll use video footage of the night’s game – a previous practices – to prepare game plans.
“I don’t really know a lot about it other than somebody let us borrow it,” Riggs said. “(Video coordinator) Tyler Reid has played with it a couple of times. Really on Fridays, they were just going to fly it and get some crowd shots.”
Riggs said there is an app on fans can download to see the video. Riggs said the drone can give some unusual video shots, and it can help with how a play evolves or angles players take to make a play.
“That is about it,” Riggs said. “We don’t have any really major plans with it. We use it for practice a little bit at practice.
“You can use it like the cameras they have on ESPN on Saturday nights at a game, too,” he said. “You can get a shot really on top of somebody. It has been really kind of fun to play around with.”
Riggs said the video will also be used for an end-of-the-year highlight reel.
“It is an interesting piece of equipment,” he said.