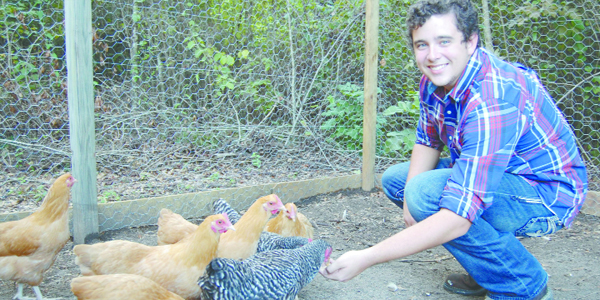 Connor Rush shows off his chickens Monday in his Appleton Road chick coop. Below: Rush feeds the chicken by hand.

No, it’s not a catcall at a construction site, it’s the sound of area 4-H’ers as they participate in the first ever “chick chain show and sale” on Saturday in Jennings Park.

For Brewton’s Connor Rush and the 60-plus other area students, the project has been an opportunity to show off their poultry skills. On Saturday, the fruits – or should we say animals – of their labor will be on sale to the general public. The event will also serve as an official 4-H competition where students and their chickens are judged on showmanship, record book keeping, handling, maintenance and other related skills.

“I love having chickens,” Rush said of the project that was supported by his entire family. Parents Connie and Dru helped to construct a chicken coop. “I love being able to enjoy something that I’ve raised up from a small animal.

“The project has also helped to reinforce the things my parents taught me like responsibility,” he said. “You have to make sure the chickens are taken care of, fed and watered.

“And in the end, when we get to show them, it’s a great feeling to present what you’ve done to the judges and to the public,” he said.

Students were given 10 baby chicks the first week of May. Varieties included Plymouth Barred Rocks, Buff Orpingtons and New Hampshire Reds. Students were able to choose five chicks of two different breeds for their project. The competition will feature the students’ two best chickens.

Escambia County Extension Agent Ken Kelley said the sale will be held “auction-style” with the birds going to the highest bidder.

“This is a great opportunity for folks to replenish their hen stock,” Kelley said. “These are backyard chickens. You don’t have to raise them. They are ready to lay eggs.

“It’s amazing that these kids have really taken to this project,” he said. “I believe they have really learned a lot.”

The sale will immediately follow the conclusion of the 9 a.m. show competition.