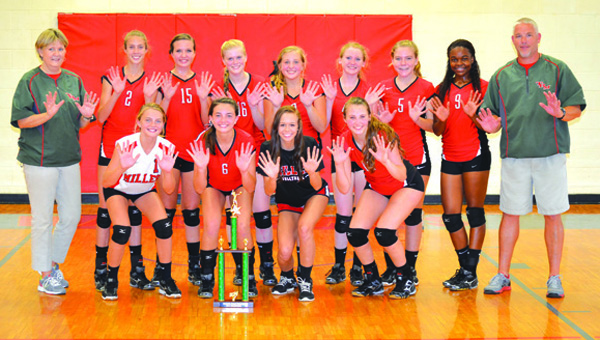 It may have been one of the hardest tournaments they had to win, but the T.R. Miller Lady Tigers volleyball team captured their 10th straight Escambia County Tournament Saturday at JDCC.
The Lady Tigers went 3-0 during the day and won all six matches by scores of 2-0.
The Lady Tigers, who improved to 9-1 overall, defeated Escambia County 25-21 and 25-14; Flomaton 26-24 and 25-16; and W.S. Neal 25-22 and 25-22.
In the final game against W.S. Neal, the Lady Tigers trailed late in set two 16-9 and 20-17 before getting the win.
Lady Tiger head coach Greg White said the whole tournament was hard-fought and one of the best tournaments in the last several years.
“I think all teams were pretty equal,” White said. “I think we just played hard all day long. We were in several bad situations, but we never gave in to it. Our theme today was that each ball mattered. We wanted to play each ball as if a game in itself. We wanted to do that with each ball. If we didn’t win one point, we wanted to win the next point. We did not want to get rattled. We played things ball-by-ball today. We got down some, but we worked things out. In the last set against W.S. Neal, I think we were down six or seven points. We just kept battling back and I am really proud of all mine for battling back. It was a good tournament overall.”
As far as the streak of 10 straight tournament championships, White said they take the tournament seriously and winning it every year is one of their goals.
“We want to win this thing each year,” he said. “We didn’t start off trying to get this streak, it just happened. We are conscience of it. Nobody wants to be that team that doesn’t win it. We do think about it. Every year is different, so we are going to have to come back next year and regroup and get a different set of folks and try it again.”
Against Atmore, Amelia Peach led with two kills, two service points and one ace in the win while Lizzy Pollitte had four service points.
In set two, Grace Ruzic had seven straight service points to open the game, with one being an ace.
Against Flomaton, lone TRM senior Brittany Warren had six service points to lead in the win in set one.
In set two, Warren had eight service points and two aces while Grace Ruzic had six service points and two aces.
Against W.S. Neal, in set one, Peach had six kills while Pollitte had seven service points.
In set two, Pollitte had seven service points and one ace.