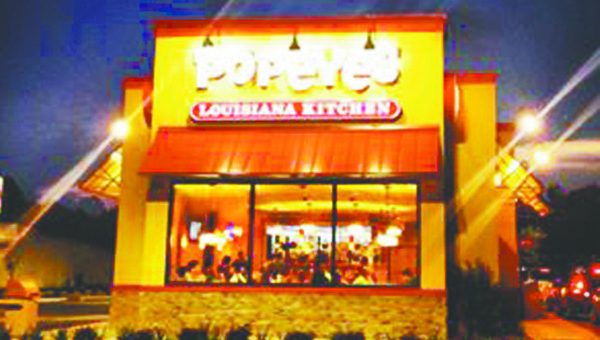 Get ready Brewton – Popeye’s Louisiana Kitchen is coming to town.
For more than a week, travelers on Hwy. 31 have noticed the activity at the former KFC building. On Monday, crews were busy doing demo work inside the structure.
The newest restaurant establishment is the latest venture between those behind David’s Catfish House – Rob Faircloth of Atmore; his son, Elliott; Bill Spurlin of Andalusia and Josh Godwin of Brewton.
The group brings eight decades of food experience and chose Brewton for its newest venture for a number of reasons, Godwin said.
“We’re excited about the brand,” Godwin said of the food chain founded in 1972 in New Orleans. “It’s the second fastest growing restaurant in the world next to McDonalds and the fastest bone-in chicken franchise.
“And, we’re proud of Brewton,” he said. “Brewton has been good to David’s Catfish House, and I believe we’ll get the same kind of support (at Popeye’s) from Brewton and the surrounding communities.
“We’re not a big conglomeration,” he said. “It will be locally-owned and locally-operated.”
The store is set to employ some 30 people, Godwin said. It will feature seven certified managers. Applications will be accepted at a later advertised date, Godwin said.
“First, we have to get the building ready,” he said. “We wanted to take advantage of an existing structure, and (the old KFC building) fit our needs. We can’t wait to bring it back to life.”
Godwin said a 2013 traffic study showed the site as a promising one.
“That was the first thing that drew us to that side of town,” he said.
Godwin said the Brewton site is only the first Popeye’s Louisiana Kitchen the group will open throughout south Alabama.
“And that’s with 30 jobs here,” he said. “That’s tax revenue that stays in Escambia County, going to the schools, the city, and while it may seem like a small impact, we think it will be big for everyone.”
Godwin said the store should open before the end of 2014.