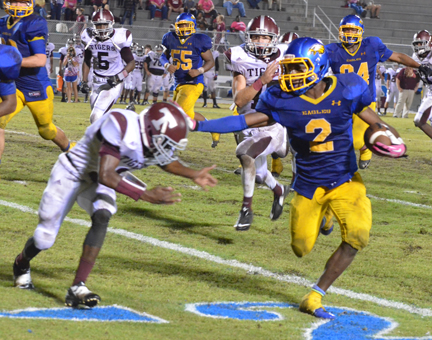 Malcolm Hawthorne gets away from a Thomasville defender Friday night.

The W.S. Neal Eagle football team picked up their third straight win Friday night at home and handed the Thomasville Tigers their third straight defeat as they cruised their way to a huge region upset win by a score of 41-7.
The win for the Eagles of East Brewton (5-2 overall, 2-2 in class 4A, region 1 play) was their first over Thomasville since a 28-9 third round playoff win in 1995. Thomasville fell to 5-3 overall and to 3-2 in region play with the 34-point loss.
W.S. Neal head coach Doug Hoehn said the win Friday night over Thomasville was a big win for many reasons.
“It was a big win, number one because it is a region win,” Hoehn said. “We have to win as many as those as possible and hopefully get a little better to make the playoffs. This win put us a little bit closer to that. It is a big win also because this is the first time W.S. Neal has beaten those guys in 19 years. Our kids are getting better every week. Thomasville is a very physical football team, but we were a very physical football team tonight and that helped a lot. It really did. We just have to keep getting better every week.”
In the game Friday, both teams failed to score in the first quarter. From there, W.S. Neal outscored Thomasville 20-7 in the second quarter to hold a 13-point lead at the half.
Malcolm Hawthorne scored W.S. Neal’s first two touchdowns of the game on runs of 2 and 3 yards respectively.
Thomasville cut WSN’s lead to 14-7 with 1:04 left before the half on a 67-yard pass.
Leading by seven, WSN used a little trickeration to get their next touchdown as quarterback Trey Taylor threw a pass to Hawthorne who then hooked up with Troy Lewis for a 47-yard score with 3.6 seconds left before the half to go up after 20-7 after a failed two-point conversion.
In the second half, W.S. Neal outscored Thomasville 7-0 in the third quarter and 14-0 in the fourth to get the region win.
Taylor hooked up with Jonathan Gantt for a 7-yard touchdown in the third quarter with 2:34 left.
In the fourth, Quenton Samuel scored on a 40-yard run with 10:35 left in the game to put WSN up 34-7. Taylor added the final score of the night on a 15-yard run with 8:18 left to play. Taylor was 5-for-5 on his PATs for the night.
For a complete game recap, see Wednesday’s edition of The Brewton Standard. 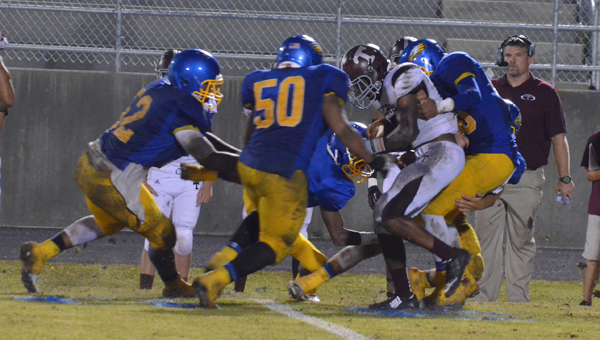