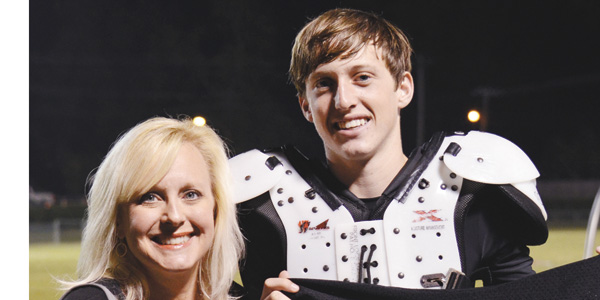 One could say that tragedy led to a Brewton woman’s triumph over skin cancer, and next Friday, she, along with 60-plus other cancer victims, will be honored at the 2014 T.R. Miller legacy and homecoming game.
It was 2007 when Mary Ann Holt of Brewton died from reoccurring malignant melanoma. Best-known around town as a nursing home lobbyist, Holt was better known by Jamie Manning and her husband, Mark, as a friend.

Manning said it was the day of Holt’s funeral when she got her diagnosis.
“I won’t ever forget it,” she said. “My husband and I met when we were life-guarding. We spend hours in the sun. When Mary Ann got so bad, Mark really pushed me to go get checked.
“The day of her funeral, they called and said I had stage 2 malignant melanoma, and our world changed,” she said.
And that’s a statement that anyone impacted by cancer can relate to, said Emmie Jernigan, founder of the Yancey Jernigan Foundation – a local non-profit created in memory of her husband Yancey that assists families with the medical costs associated with cancer treatment. It provides up to $500 in medical and pharmacy expenses for patients.
In the five years since Manning’s diagnosis, she has undergone surgery and is now cancer-free. Now, her son Jones and others on the TRM football team are working to help raise money for the Yancey Jernigan Foundation through its legacy game. For the second year in a row, players have chosen people who are meaningful in their lives to honor on the field. Throughout the month of October, those players have worked to raise money to help fund the foundation. Last year’s event raised more than $20,000.
Jernigan’s son Yancey is also playing in this year’s game. He is playing for her grandfather who passed away at 58.
This year’s game will be held on Fri., Oct. 24. Kick-off is at 7 p.m.; however, players will take the field on Thurs., Oct. 23, during the alumni game. Photos may be taken at halftime.
Donations are tax-deductible and donors are asked to designate whom the donation is made in memory of, Jernigan said.
“This whole experience has taught our boys how important it is to give back to their community,” Jernigan said. “It’s a great way for them to be able to do that in a big way to this community. This year, we have 65 participants, and last year, during the presentation, it was really humbling to see how many of those people you know.”
For more information, contact Jernigan at 251.363.0213.
Donations may be taken to the foundation’s office, located at 616 Douglas Avenue, inside the English Realty building; mailed to P.O. Box 37, Brewton, AL 36427; or dropped off at the TRM front office. Donations should be labeled with the player’s name or jersey number.